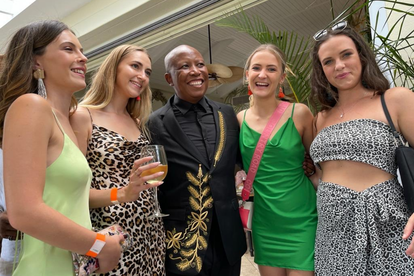 This photo has brought Malema a lot of attention. Image via Twitter: @Julius_Sello_Malema

This photo has brought Malema a lot of attention. Image via Twitter: @Julius_Sello_Malema

The EFF’s Julius Malema has stirred many reactions on Twitter after sharing a photo of himself with four beautiful white young ladies. In the clip, all of the photo’s occupants can be seen smiling broadly as they pose for the camera. Many people appear to believe that there is a hidden message behind his post and have voiced their thoughts in the comment section.

Julius Malema of the Economic Freedom Fighters is well known for his controversial leadership style and his natural air for causing big stirs both in person and on social media.

The CIC has once again found himself at the top of Twitter trends lists after he shared a photo of himself earlier today posing with four white women who appear to be just as excited as he is to be a part of the photo.

He captioned the now-viral photo:

The comments section was almost instantly filled with comments from both EFF supporters and EFF critics who shared their thoughts on Malema who once sang “Kill the Boer” and was taken to court for it.

Others compared the red beret leader to Soweto activist Nhlanla Lux who was recently detained by SAPS. Here are some of their comments:

“Juju o steering, what now, you only hate white males? Because they are loaded you can’t compete with them…”

“securing the land 😭🙏. we see you leadership.”

“Malema doesn’t stand for what he says, he always does the opposite.”

“A so-called pro-black and pan Africanist is using a picture of white women as a benchmark/ neutralizer. Are white women “everybody “or do you mean if white women can take a pic with me then clearly nobody hates me 😭. Julius Malema has been a fraud though. Free #nhlanhla_lux”