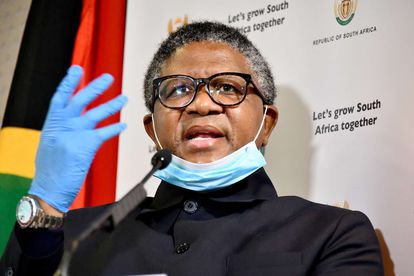 Welcome minister, welcome. This time, local beatmaker Max Hurrell has remixed the hell out of Transport Minister Fikile Mbalula’s famous words about planes being able to “eat the virus” — the coronavirus.

To be fair, Hurrell did warn us early on Wednesday, kicking off the month of July with a bang. He said:

Next thing we knew, our ears were graced with another whopper of a jam.

Addressing the media on Monday 29 June, Mbalula discussed the reopening of the aviation industry. Little did we know, the minister would drop some interesting remarks.

Mbalula, said all flights could operate at 100% capacity despite the coronavirus pandemic. He justified the directive by saying that the air filtrating systems would be able to eat the virus.

“People ask why we are operating at 100% capacity on flights. It’s because planes can absorb disease. Planes are fitted with High-Efficiency Particulate Air-Filters (HEPA). The plane is not a taxi. You fly for, say, two hours and you are compressed. The filter can eat any form of virus, including COVID-19,” he said.

“The same does not happen in a car or a taxi. You can have the windows down, and the multiple stops. These are very technical issues and since we reopened, there’s been no coronavirus cases linked to flying. You are better protected on a plane than you are anywhere else,” added Mbalula.

We wonder how Mbalula will react to his debut remix. He may love it, he may detest it, but either way, Hurrell has once again, managed to make us nod our heads with approval.

Mbalula is not the first to be graced with Hurrell’s beats though. It all began with “When People Zol,” taken from none other than Cooperative Governance and Traditional Affairs Minister Nkosazana Dlamini-Zuma.

Dlamini-Zuma’s “When People Zol” remix really did the things. It reached number one on the Apple Music Charts, beating Drake two days in a row.

From there, Hurrell targeted Police Minister Bheki Cele. The minister became somewhat of a controversial figure regarding alcohol and cigarettes so it took Hurrell no time at all to pounce.

Then came word of a potential collaboration with Finance Minister Tito Mboweni but a song has not been released as yet. Only time will tell.