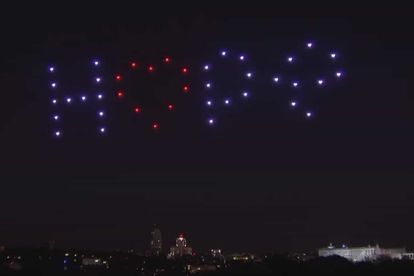 Spain has been one of the worst-hit countries with regard to COVID-19, with over 296 050 total cases as of 30 June 2020. Now, in order to recognise those working on the frontlines and those who lost their lives due to the virus in Spain, new reports state that forty programmed drones with multi-coloured LED lights danced an aerial ballet, forming different shapes and letters – including a heart and two people. They also spelt out words including “Hope” and “Heroes” in LED lights.

It’s said that a Spanish company named UMILES Group sent the drones into the night sky to perform the memorising 10-minute long aerial ballet. Of course, the location of the performance remained a secret until it took place to avoid crowds forming.

LIGHTING UP THE SKY WITH HOPE

The gesture follows in the footsteps of various places over the world that is showing some love due to the world’s latest pandemic.

The words “hope”, “love” and a giant heart recently lit up Durban’s Southern Sun Elangeni and Maharani hotel in a picture that quickly went viral

“It was a message of hope to our staff and all in the hospitality industry,” general manager Wayne Smith told IOL. “I come to work to keep the building ticking over and was just trying to keep everyone inspired and motivated. I thought, ‘How can I keep everyone going?’”

He says that it was quite a challenge.

“I took a picture of the complex the day before and worked on it at home with the family. We managed to work out how to write on the two towers and then had to identify the room numbers and plotted it all on a spreadsheet. The hotel is limiting power in the building so we switched on all the DB boards. It took three of us about four hours walking the passages and going to the rooms to switch the lights on and open the curtains. There were 153 rooms.”

Smith said he hoped the signs were positive going forward, not just for the hospitality industry, but South Africa as a whole.