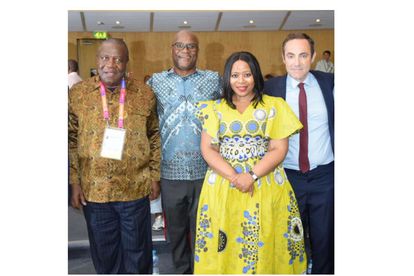 The event had been arranged in order to celebrate South African athletes and officials participating in this year’s Games, and the formalities were kicked off in grand style when a projected big screen allowed those in attendance to watch one of the real stars of SA athletics, fast man Akani Simbine, book his place in the men’s 100m final by sprinting to a comfortable victory in his semi. The amphitheater erupted in cheer, this being just the latest showing of Mzansi’s success at a Commonwealth Games which is quickly shaping up to be one of the best yet for the land of smiles and sunshine

Of course, sport, arts and culture are intrinsically linked and so after hearing briefly from Minister Mthethwa, Dr Mamabolo and the President of SASCOC, Barry Hendriks, Ekhaya turned her attention to song and dance. Live music by local South African artists Vusi Mahlasela and “Qadasi and Maqhinga’ drenched every expat with a healthy dose of nostalgia and brought the crowd to their feet, demonstrating a kind of collective rhythm that most in Birmingham will never have.

The formalities closed with what was for many the highlight of the evening, as a performance from the Tribanghi Dance Theatre reminded all of us that we are truly better together. The group’s emotive performance combines traditional Zulu and Indian dance in a way that works beautifully, even when you think it shouldn’t. In many ways this is the story of South Africa and South Africans – it’s a nation built on struggle and often defined by setbacks, but driven forward by the commonalities that exist even within stark diversity and a deep sense of understated patriotism.

“As South Africa’s representative in the region, it was a true privilege to welcome not just the senior delegation but also all of Team South Africa to Birmingham, part of the region which I have represented for 11 years. The South African medal count is already moving quickly in the right direction as our athletes once again do us proud across multiple disciplines. The mood tonight was a reminder of everything that we love about South Africa”,

A taste of home

As the evening wound down, guests mingled and got a taste of home, savouring the Motherland’s favourite grapes alongside some fine local cuisine, while poking fun at the 20-degree mid summer’s day. As we move through the halfway point in what to date has been an exceptionally well delivered Commonwealth Games, it’s clear that South Africans have arrived in good numbers to get behind our fantastic athletes, as they look once again to challenge the world’s elite across the tracks, pools and fields of Birmingham.