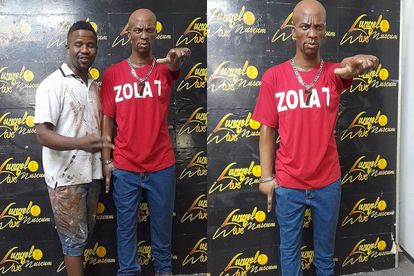 South African artist and sculptor Lungelo Gumede is on a mission to open Mzansi’s first wax museum. The Durban-based artist, who has created life-sized sculptures of former president Nelson Mandela and Winnie Madikizela-Mandela, has also created a wax figure of Zola 7. When the kwaito star’s sister saw the wax figure for the first time, she could not believe her eyes.

ALSO READ: ‘That I know of’: Zola 7 ‘unsure’ of how many kids he has actually fathered

Gumede caused quite the stir after creating a wax figure of the late hip-hop star, Riky Rick. The rapper’s brother told Daily Sun that it was “too soon” for the wax figure.

The artist responded by saying: “Why shouldn’t I be allowed to do my work on him as an artist?”

TAKE A LOOK AT SOME OF HIS WAX FIGURES HERE

Gumede is one of the many people giving Zola 7 his flowers. The talented artist honoured the kwaito star with a wax figure and unveiled it on Tuesday 5 April, bringing Zola’s sister to tears.

“This is crazy! You got every single piece of him,” she said.

Gumede shared the video on Facebook with the caption: “The reaction from Zola 7’s sister after seeing iWax Statute… she was literally in tears.”

Zola 7 was honoured at the Kwaito Legends Festival on Saturday 2 April at the Bears Palace in Mpumalanga. The likes of Professor, Spikiri, Doc Shebelza and Mapaputsi all performed. The proceeds from the festival were donated to Zola.

“I went through a whole rollercoaster of emotions over the last two days I spent in Mpumalanga. I laughed, cried, smiled and was overwhelmed by all the love shown to me.”

“Thank you for everyone who played a role in making this possible,” he wrote on Twitter.