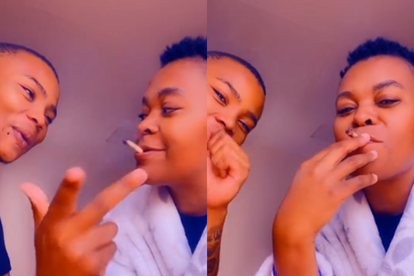 Zodwa takes a puff or two of a zol. Images via Twitter: @musakhawula

Zodwa takes a puff or two of a zol. Images via Twitter: @musakhawula

South African exotic dancer Zodwa Wabantu and her man seem to be going strong and have reached “new highs” in their relationship – literally. The pair have been trending online after they were seen puffing away on a dirty skuif in a viral video. It appears they both were on a high as they laughed and giggled while surrounded by smoke clouds.

Zodwa Wabantu smokes a dirty skuif with her man

Zodwa Wabantu is one of the country’s most fearless and tell it like it is entertainers. When she isn’t showing off her ample booty on her Instagram, she is snatching young men and making them her Ben 10.

It appears there are no limits for Zodwa who was recently recorded getting high on a dagga joint.

In a clip that has been shared on social media a number of times, Zodwa and her young boyfriend Ricardo CPT can be seen with pretty red eyes and huge grins on their faces as they take big pulls of their marijuana cigarette.

At one point, Zodwa starts coughing uncontrollably while asking the young man if he’s trying to kill her with the joint.

Many people remarked that this kind of video was influencing children to do the same. Others commented on the couple’s romance with many of them questioning how long the relationship will last between them. Here are some of their comments:

“Kids see this as cool and try do it at school too to remain relevant. ????then we wanna come back and push the buck to say kids must be disciplined at school. No charity begins at home . ???? Please do not attack me, I’m a single mom of 34.”

“Just the other day she was selling veggies looking like a new lady..oh well”

ALSO READ: Veggies with a side of nudity: Is Zodwa Mzansi’s latest street vendor?