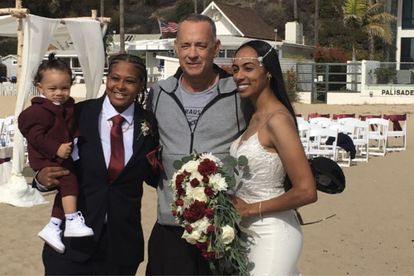 Tom Hanks delighted a newlywed couple as he crashed their big day.

The 65-year-old actor – who has been married to fellow actor Rita Wilson since 1988 – surprised brides Diciembre and Tashia Farries when he turned up to their nuptials on the beach near Santa Monica Pier in California, and they admitted it was the “cherry on top” for their wedding.

TOM HANKS WAS THE ‘CHERRY ON TOP’

“We were so in our own moment so for him to walk up, it was shocking and took a second for us to realise. It was the cherry on top for our big day.”

Hanks is said to have spent five minutes speaking to the couple and posing for pictures. Diciembre believes it was “meant” to be that Hollywood star Hanks happened to be on the beach on their big day.

“Our wedding was already a dream to me. To finally marry her – this was our day. And everybody we love was there, and … Tom Hanks just walks up!”

“Out of all days, out of all people, he walked on the beach today. It was meant [to be]. For us to be two women – yes it’s 2021, but it’s just unfortunately not accepted everywhere yet. But it’s like he didn’t even see that.”

NOT THE FIRST TIME TOM HANKS HAS CRASHED A WEDDING

Diciembre’s brother passed away in 2017 and there was a picture of him on a chair alongside the rest of the family.

She told Tom about her late sibling, and the Cast Away star revealed he shared the same birthday as her brother.

“So he wasn’t at the wedding, but Tom Hanks coming was his way of saying he was here,” said Diciembre.

However, this isn’t the first time Tom has crashed a wedding. In 2016, he was jogging in New York City’s Central Park when he came across nuptials, and he posed for pictures with the newlyweds.

ALSO READ: The Kolisis on safari: Inside Rachel and Siya’s Zululand breakaway [watch]