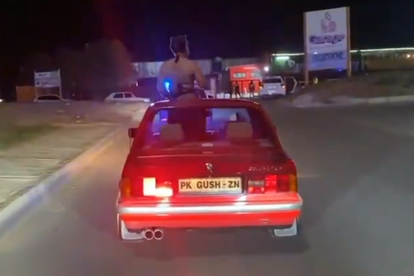 If anyone knows how to make an entrance, it’s Zodwa Wabantu. The social media and reality TV star – famous for her risque dancing and raunchy antics – was on top form at a club event on Thursday. But her use of a blue-light escort to the venue has left her exposed to criticism, after she was accused of ‘abusing state resources’.

In a video uploaded by Zodwa Wabantu to her own Instagram page, a National Traffic Police car can be seen guiding her vehicle towards the front of the building. While the entertainer lives her best life, hanging out the sunroof of her personalised motor, the convoy continues forward to the function.

Of course, no-one batted an eyelid at the time – the crowd in Mthatha, Eastern Cape were enjoying the vibe way too much to start weighing up the political ramifications of this stunt. But as revellers turned a blind eye, social media stayed ‘woke’.

Watch: Zodwa Wabantu slammed for use of ‘state resources’

Several comments and posts online reveal *not everyone* was a fan of Zodwa Wabantu’s blue-light brigade:

The blue-light escort from the National Traffic Police, or ‘The Bitch Entrance Escort’, as Zodwa Wabantu so elegantly labelled it, has left a sour taste in the mouths of many. But has that upset the bawdy socialite?

Like hell it has. She has posted two more updates since the controversy was sparked – one’s about a visit to a health spa, and the other is to promote another club night she’ll be attending this weekend. Classic Zodwa, really…