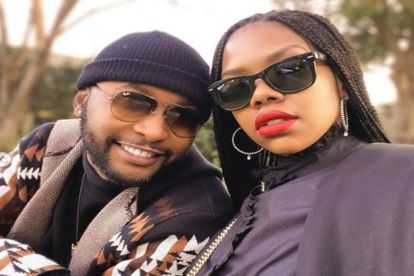 Musician Vusi Nova has squashed rumours that he’s “dating” Somizi once again by posting a picture of him and his girlfriend on his Instagram account.

Nova has apparently been dating his “nameless” girlfriend — she is only known by her social media handle “Snobwithablog” — for more than a year already.

This is not the first time Nova has shown off his girlfriend. In December last year, Nova also took to social media to gush over his girlfriend in his Instagram Story.

VUSI MAINTAINS HIS FRIENDSHIP WITH SOMIZI

Vusi Nova and celebrity chef and media personality Somizi Mhlongo began to trend when rumours of “trouble in paradise” between Somizi and his husband, Mohale Motaung began to do the rounds last year.

The musician and Somgaga further hogged headlines with their frequent and luxurious “bestiecations”.

The pair jetted off on a business and pleasure bestiecation in Cape Town, and flew in a private jet where they were served bubbles and feasted on the finest of culinary delights.

The two were also spotted in Limpopo on the Shalati Train and were seen having breakfast in the bush at the Kruger National Park.

Fans have also noticed that Somgaga and Mohale have taken off their wedding rings and removed some of their pictures on their social media accounts.

THE TRUTH IS REVEALED…

Vusi got candid about his struggle with drugs and his relationship with Somgaga in Jon Savage’s What’s Your Poison?  podcast.

The musician stated that he’s known Somizi for 16 years. He met him before he was into the music industry.

“People out there are saying that we are dating but we’re not dating. We have mutual respect for each other and we trust each other a lot…With us, it’s realness all the way. It’s been 16 years now and we’re still going strong.”