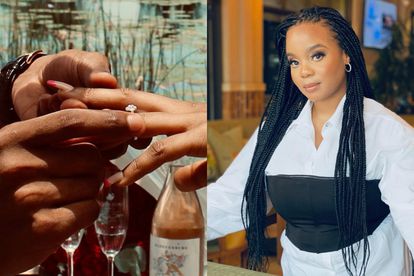 Actress Tee Xaba, popularly known for her role as Sphilile on Uzalo, announced her engagement on Monday 27 December.

“God, I am truly grateful. Growing up without a father figure my idea of what a man should be and stand for has always been distorted . You came into my life and I never knew how broken I was. I had daddy issues and didn’t even know. You didn’t walk away because of my baggage but instead you chose to walk the journey of healing with me as we still are,” she wrote on Instagram.

“Because of you I believe in true and unconditional love. Thank you for sticking by me mfto. God is truly faithful and will continue to be. We have a long way to go, growing in love together but honestly I wouldn’t do it with anyone else,” she continued.

“Thank you for choosing me sthandwa sami. Here’s to becoming #MrsM. We’re engaged 💍🤍🥺,” she added.

XABA ON LOVE: ‘I AM A HOPELESS ROMANTIC’

Tee opened up about being a hopeless romantic when her character Sphilile was about to marry a man who loved two women. She explained that her character would go to the ends of the earth for love but that’s where she is different. The actress said that she knows her worth. So, she would not sell herself short.

“I am a sucker for love myself, I am a hopeless romantic. But l I am not stupid in love. I would never forget who I am just because I am in a relationship. I know my worth, which is what I don’t think Sphilile sees. She doesn’t consider herself to be all that important. I think she downplays how amazing she is, which is nothing like me,” she said to Tshisa LIVE.