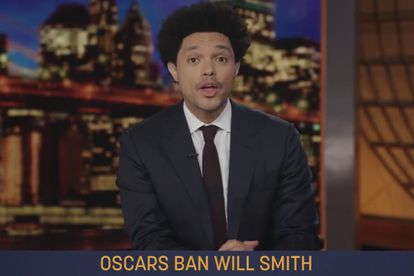 Trevor Noah has weighed in on Will Smith’s Oscars ban.
Image via YouTube screenshot
The Daily Show

Trevor Noah has weighed in on Will Smith’s Oscars ban.
Image via YouTube screenshot
The Daily Show

Trevor Noah has weighed into actor Will Smith’s Oscars ban – and it’s hilarious!

On Tuesday 12 April, The Daily Show host took a moment to reflect on his Hollywood bestie’s decade-long ban from the prestigious film academy

Last week, the Academy Awards announced that Will not be welcome at their annual awards ceremony. This, after he slapped host Chris Rock during a heated moment.

The comedian had “unknowingly” joked about Will’s wife Jada, who sported a bald head at the event due to auto-immune illness alopecia.

Despite the ban, the Oscars has permitted the star to keep his “Best Actor” award for his role in tennis biopic King Richard.

In a clip uploaded this week, Trevor Noah – who was criticised for “comforting” Will Smith at the Vanity Fair Oscars after party, weighed in on the news.

Whilst he initially claimed that the ban was “ridiculous”, the South African claimed it was actually a “favour” for the star.

He said: “I got into the details and I realized he gets to keep his Oscar and he can still win Oscars even though he’s banned. This is a favour!”

Trevor then roped Chris Rock into the conversation.

He continued: “I also think they should have at least consulted Chris Rock before choosing the punishment, you know?.

“Because if Will were still going to the Oscars, that’s at least four hours where Chris Rock knows where he is. Now, he could be anywhere.”

Trevor Noah also joked that that the Oscars should’ve hired Will Smith instead to scare off winners who babble too long in their speeches.

He added: “Do you know how quickly winners will finish their speeches when they see Will Smith watching them from the side of the stage?”