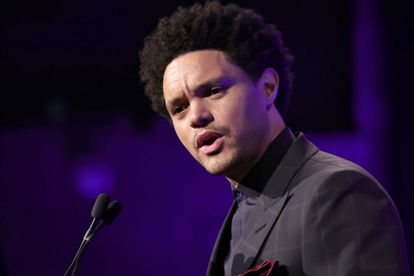 The week was filled with surprises after Trevor Noah decided to address Kim Kardashian and Kanye West’s currently very awkward separation and how the rapper’s behaviour has negatively impacted their looming divorce. Kanye did not take kindly to Trevor’s thoughts and resorted to spewing racial slurs which subsequently got him suspended from Instagram for 24 hours.

Since then, South Africans have called on the award-winning rapper to back off from Trevor who they say spoke nothing but the truth about Kanye’s “extremely abusive and worrisome” actions over the last few months.

Kanye West has been called out by a number of people for harassing his soon-to-be ex-wife Kim Kardashian and her boyfriend Pete Davidson.

The Jesus Walks rapper has consistently taken to social media to either launch verbal attacks at the reality TV star or intimidate her comedian boyfriend who has tried to remain calm even though it appears things could become dangerous.

Trevor Noah, who like the rest of the world has had to bear witness to Kanye’s behaviour, shared his thoughts in a segment of The Daily Show – and judging by his reaction, Kanye did not appreciate it.

He took to his Instagram where he called Trevor names and tried to make a point of the fact that he had to Google the comedian to find out who he is.

Here’s what locals have had to say

“Kanye better back off of Trevor Noah that’s our homeboy.”

“Trevor’s response after Kanye West insulted him. This is another reason why Trevor Noah is my role model. He handles adversity in a mature manner. These words are beautiful & I hope Ye understands what they mean & the humbleness it takes someone to share all this.❤️”