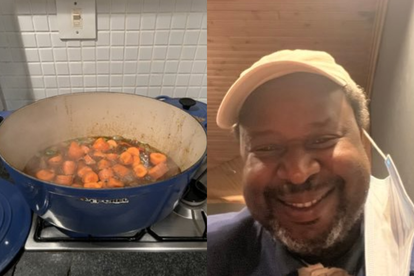 Former South African Finance Minister Tito Mboweni is living his best retired life. It appears most of his free time is being spent in the kitchen with him trying out new and often weird stews and curries. His latest culinary creation was a pot of lamb stew which he didn’t seem to be very impressed with – which was weird because usually he isn’t the one criticising his own cooking.

Tito Mboweni is working very hard to become somewhat of a kitchen genius but it appears his efforts may be in vain.

The retired minister gained himself a reputation for  cooking all sorts of weird and wonderful meals which haven’t exactly got him compliments online.

This might be because the fun loving ex minister has a tendency to add way too much garlic and veggies to his pot.

It appears he may have once again made this mistake while trying to cook himself a hearty lamb stew.

Heading online, Tito couldn’t hide his disappointment over how the cooking was going:

“Trying my best to make a lamb stew. Not looking promising” he wrote.

As usual, Titos critics weren’t holding back on their thoughts of his cooking skills. While some suggested he finds a wife who enjoys being in the kitchen, others joked about his overuse of carrots. Here are some of their comments:

“Yoooh, Tito and the expensive pots. The contents always leaves much to be desired.”

“Tito should  hire a chef since he’s rich before he kills himself with brown onion soup carrots stew,it’s very cold to be attending a funeral done deliberately.”

“Not that he likes carrots too much, he likes to use too much of everything when he’s cooking , even water . Too much garlic, too much onion, whole box of tomatoes”