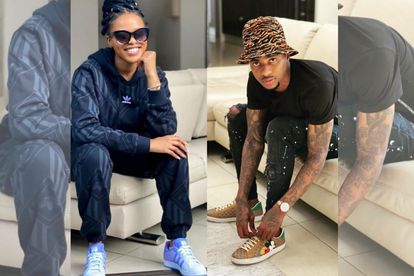 It all began when the actress posted an image of herself in an orange bikini, wearing reflecting sunglasses which revealed her camera man whom the Twitter police identified as Lorch.

The duo however has now responded to the rumours, denying that they’re a couple on a baecation in Zanzibar on their respective social media accounts.

Thahane indirectly denied she is seeing anyone by replying to one of her old tweets about being single. She tweeted that she’s been single for three years and counting.

Maphorisa asked Lorch in the video where he is to which the Orlando Pirates winger replied that he is at home. This despite his background in the photos clearly shows that he’s on the beach.

After that, his DJ friend fills him in on the latest rumours about an island romance between him and the well-known actress.

Maphorisa then asks the footballer directly whether he is romantically involved with Thahane.

What do I have to do with Natasha?

He even pretends to not know who the actress is in the Instagram Live video.

But what about those Zanzibar pictures?

Lorch and the actress took several pictures in Zanzibar, which convinced tweeps that the two are a couple.

Even though they’ve never posted pictures together on their social media accounts, their images exposed them.

The pair seem to be baecationing together as they appear to be at the same location at the same time.

The footballer also trended in 2019 when social media influencer Mihlali Ndamase tweeted in isiXhosa that she finds him attractive.

The Twitter streets went wild after Ndamase’s tweet as all of a sudden Lorch was every woman’s MCM (Man Crush Monday).

Mihlali Ndamase also made headlines earlier this month when she made the Forbes Africa “30 under 30” list this year.

She joined the likes of Reinhard Mahalie who is a creative from Namibia, Shakemore Timburwa who is a computer specialist from Zimbabwe, Antonio Depina who is a sports star from Cape Verde and Cleo Johnson, a businessperson from South Africa.