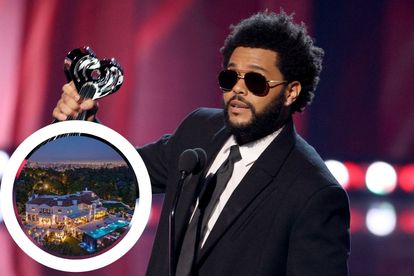 The Weeknd and Take My Breath hitmaker – whose real name is Abel Tesfaye – just dropped R1 billion on a massive mansion in Bel-Air. It is said to be ‘one of the most expensive sales’ to take place in Los Angeles this year.

Inside The Weeknd’s Bel-Air mansion

According to Architectural Digest, the home measures approximately 33 000 square feet and packs quite a punch. A gym, movie theater, music studio, sauna, hammam, and indoor pool are among the many offerings inside the house, while the exterior boasts a sports court, an infinity pool with a waterfall, and a dramatic split staircase leading from the upper patio to the lawn.

All of these amenities sit on a 1.6-acre lot that overlooks the Bel-Air Country Club.

This purchase comes just months after the singer sold his former home to Madonna. It is believed that the former owners of The Weeknd’s new property, Reinout Oerlemans, a Dutch media mogul, and his wife, the competitive cyclist Danielle Oerlemans, weren’t even planning on selling the property prior to interest from Rayni and Branden Williams of the Beverly Hills Estates who wanted to show the property to Tesfaye.

On the hunt for a new home

Williams told the Wall Street Journal that she knew Tesfaye was on the hunt for a new home and thought this property would fit his criteria perfectly. The Oerlemanses initially resisted but eventually came around, she said. The home sold in an off-market deal.

The couple purchased the property in 2015 and made a few adjustments. They initially bought the property for R325 million. The residence now features numerous unique accents, including leather belts repurposed into kitchen drawer handles, orange gloss paint on the living room walls, and walls lined with subtle wooden sunburst panels in the office.

After the news made headlines, fans are eagerly waiting to see how the three-time Grammy award winner will redecorate the space.

Watch: Take a peek inside the property