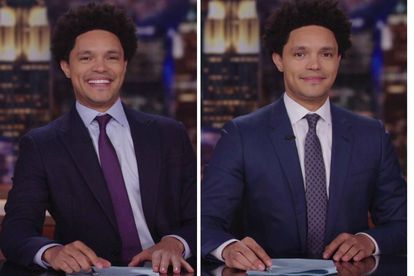 Trevor Noah is resigning as host from The Daily Show after seven years.
Image via YouTube screenshot

Trevor Noah is resigning as host from The Daily Show after seven years.
Image via YouTube screenshot

Trevor Noah’s seven-year tenure at The Daily Show has been filled with highs, lows, and plenty of laughs.

But that will be all ending when the host of the US talk show bids farewell next month. In September. Trevor revealed that he would be leaving the show to pursue other career opportunities.

The South African comedian leaves behind many memorable moments. Here’s a look at the good, the bad, and the hilarious.

It’s not always been sunshine and rainbows on the set of The Daily Show. On several occasions, viewers claimed Trevor Noah crossed the line between funny and offensive. And many of those times involved him wading into politics and race relations.

In 2019, Trevor was forced to apologise when he made a joke about the border tensions between India and Pakistan. In a “Bollywood” accent, the star joked that the two countries were likely to put on an “entertaining dance off” than engage in warfare.

But Trevor failed to read the room on the violent history of the countries and was labelled “insensitive” by viewers, particularly Indian ones.

But in an “apology” Trevor Noah defended his skit, claiming he “used comedy to process pain and discomfort”.

ALSO READ: Trevor on Dua Lipa, being accused of affair with married friend

In an emotional address in 2020 following the death of George Floyd, Trevor Noah shared a thought-provoking dialogue on systematic racism, police brutality, and holding people in high positions accountable for their actions.

He said in part: “I don’t know what made the video more painful for people to watch, the fact that that man was having his life taken in front of our eyes, the fact that we were watching someone being murdered by someone who’s job is to protect and serve, or the fact that he seemed so calm doing it”.

Reporting from his New York apartment due to strict Covid-19 restrictions at the time he continued: “We need people at the top to be the most accountable because they are the ones who are basically setting the tone and the tenure for everything we do in society.

“The reason that [we lead by example] is because we understand that in society, that if we lead by example, there is a good chance that people will follow that example that you have set. And so if the example law enforcement is setting is that they do not adhere to the laws, then why should the citizens of that society adhere to the laws when in fact the law enforcers themselves don’t.”

In March this year, Trevor Noah shared another thought-proving address about gender-based violence and his mother’s own history of suffering domestic abuse.

Using Kim Kardashian and Kanye West as an example, the comedian called out the latter for his toxic behaviour. This followed continued reports of Kanye “harassing” his ex in public following their split last year

Trevor said: “What we’re seeing is one of the most powerful, richest women in the world unable to get her ex to stop texting her, to stop chasing after her, to stop harassing her. Think about how powerful Kim Kardashian is, and she can’t get that to happen”.

And that’s where things hit close to home for Trevor Noah. The Mzansi-born star compared the scenario to a situation his own mother went through.

“Once we went to the police station and they asked my mom: ‘But did you talk back?’ Is that why you’re here? What did you say to him?

Trevor Noah then revealed that after years of being gaslighted by police, family members, and outsiders, his mom was eventually shot in the head by his stepdad.

He continued: “Maybe that’s why I look at the story differently. I’m not saying Kanye will [do that].

“But as a society, we have to ask ourselves questions. Do we wish to stand by and watch a car crash when we thought we saw it coming? Or do we at least want to say, ‘Slow down, let’s all put our hazards on because there’s a storm coming and *** might go down.’”

He concluded, “If Kim Kardashian cannot escape this, then what chance do normal women have?”

Choosing our favourite Trevor Noah moments on The Daily Show is like picking a favourite child!

Nevertheless, the ones that stand out are always his hilarious impressions and accents and his reflections on life back home in South Africa.

Here’s a compilation of the funniest moment put together by the show.