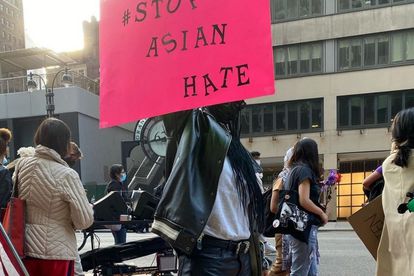 TikToker @jeanniejay helped host a #StopAsianHate protest in New York and she was surprised to find the Umbrella singer amongst the crowd as one of the protesters.

Rihanna went fully undercover in a black facemask, dark sunglasses and a baseball cap holding a neon pink placard in the air. Her hand made placard read “STOP ASIAN HATE” on one side and “HATE= RACISM AGAINST GOD” on the other side.

Rihanna’s assistant Tina Truong also posted footage to her Instagram story of the Diamonds singer making the sign as well as a few videos from the actual protest.

The Fenty Beauty owner is also seen dancing to chants of “my body, my business”.

Rihanna was so unrecognisable at the protest that a fellow protester asked her for her Instagram handle, possibly to tag her on his social media videos.

Rihanna then typed in @badgirlriri on his phone and he took a while to digest that it is actually Rihanna.

The #StopAsianHate movement has grown over the last few months following  asurge in Asian hate crimes following the coronavirus pandemic. According to Dazed Digital, a report found that 3800 Asian Americans reported hate related incidents since March of 2020 to February 2021.

The hate against Asian people was taken to the next level at the Atlanta shootings that killed eight women, six of which were of Asian descent. In Rihanna’s post she addresses the shootings .

“what happened yesterday in Atlanta was brutal, tragic, and is certainly not an isolated incident by any means,” wrote Rihanna on Instagram.

“I’m heartbroken for the Asian community and my heart is with the loved ones of those we lost yesterday,” she added.