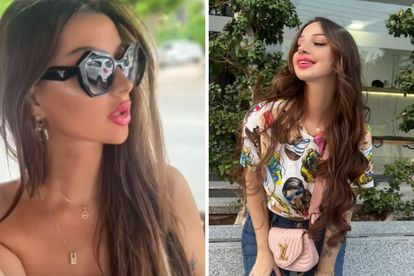 Iva Ristic – the wife of Springboks player Elton Jantjies – has clapped back at an IG user who accused her of attention-seeking.
Image via Instagram
@ivarisstic

Iva Ristic – the wife of Springboks player Elton Jantjies – has clapped back at an IG user who accused her of attention-seeking.
Image via Instagram
@ivarisstic

Iva Ristic – the soon-to-be ex-wife of Elton Jantjies – has been thrust into the spotlight in recent weeks. And for many outsiders, it seems the model has been lapping up the attention…

The Springbok WAG has revealed her intention to divorce her husband following his confession of an affair with team dietician Zeenat Simjee.

She’s also been very active on her social media pages, updating fans on her family life and relationship with Elton, whom she shares three children with. The family of five are currently in Turkey.

IVA RISTIC CLAPS BACK AT TROLL

Whilst Iva has voiced her frustration that Zeenat Simjee remains on the Springboks squad, whilst husband Elton was seemingly snubbed, she’s also had to clap back at a critic on social media.

On Tuesday, 22 November Iva and an Instagram follower who accused her of “attention-seeking” went head to head in the comments section of one of her latest posts.

The follower accused Iva of “caring more about posting your appearance and trips” than seemingly salvaging her marriage”.

The critic claimed: “You really do care more about the gram. You obviously live for the attention good or bad”.

To which Iva clapped back: “I usually don’t take pictures while crying. you can’t judge by a photo if someone is happy or sad. I don’t use my platform to express my daily emotions.

She continued: “I am FAR from any kind of a celebrity.. I’m a mother of 3 that happened to travel more than some other people (not always by my choice). I try my best to embrace that and make beautiful memories with my babies and my closest ones”

Iva added that she was using her social media platform to “inspire” others going through similar situations.

“I wouldn’t just change my content or stop posting because of personal issues. I try to inspire and give strength to many other people that are pretty much going through what I am going through”, she posted.

ALSO READ: Elton Jantjies claps back at Zeenat’s denial: ‘She knows the truth’

NO HOPE OF A RECONCILIATION WITH ELTON JANTJIES?

With Elton Jantjies reunited with his family in Turkey, many of his followers have expressed their hopes of the couple reconciling.

However, Iva has made it clear that she is not working on her marriage with Elton.

Speaking to News24, Iva confirmed her plans to divorce her husband. She told the publication: “Unfortunately I can’t offer Elton anything more than friendship”.

She added: “This chapter of our lives has been dragging on for too long. I just want it to be done so we can all move on. I don’t think I will ever be romantically involved with Elton again.

“It’s been a rollercoaster of emotions for us all. But we want to close this chapter so we can all move on. There will always be love among us, but as to where we go from here, that remains to be seen”.