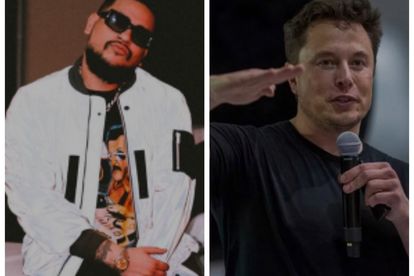 Rapper AKA has reached out to billionaire businessman Elon Musk to come to South Africans’ rescue following the shock news of the implementation of stage 6 load shedding. Image via @akaworldwide @elonmusk.ab/Instagram

Rapper AKA has reached out to billionaire businessman Elon Musk to come to South Africans’ rescue following the shock news of the implementation of stage 6 load shedding. Image via @akaworldwide @elonmusk.ab/Instagram

AKA is NOT rapping lyrical about Eskom’s announcement on Tuesday 28 June that the country will be moving to stage 6 load shedding.

The Fela in Versace hitmaker turned to the Twitter streets to ask South African-born billionaire Elon Musk to take over and help solve the ongoing electricity crisis.

‘DO IT FOR YOUR COUNTRY’: AKA TELLS ELON MUSK

The award-winning rapper and businessman took to Twitter to lament the stage 6 load shedding in a series of tweets.

AKA then went on to share his views of Eskom, saying he believes an alternative, in terms of power supply, should be considered. Finally he reached out to Tesla and SpaceX CEO Elon Musk, begging him to come to the country’s aid.

“Excuse me, sir … @elonmusk … I cannot for the life of me understand why the government hasn’t approached you to come help us out with this electricity crisis, but is there any chance you could perhaps do us a solid, you know, with you being born here and all,” AKA wrote.

Continuing his plea, the father-of-one who has been dating musician Nadia Nakai, tweeted the following:

“Please @elonmusk, I know you have a solution for load shedding … do it for your country 😭 … your original one.”

ALSO READ: Stage 6 load shedding: What is it and how will it affect us if it is implemented?

During an emergency meeting on Tuesday morning. Eskom chief executive Andre de Ruyter said the power utility could be forced to introduce stage 6 load shedding due to a significant deterioration of its operations overnight. De Ruyter said that 10 operating units had been lost overnight, with total unplanned losses sitting at 14,204MW.

Within hours, the nightmare of stage 6 load shedding was confirmed, with Eskom announcing it will ramp up blackouts from 16:00 to 22:00 on Tuesday and Wednesday.