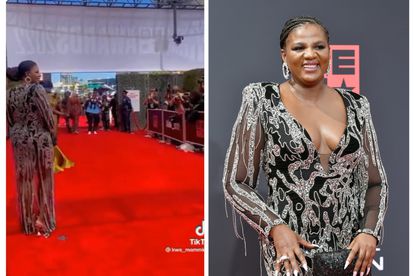 Shauwn Mkhize was seemingly snubbed on thered carpet at the BET Awards..
Image via Instagram @kwa_mammkhize

Shauwn Mkhize was seemingly snubbed on thered carpet at the BET Awards..
Image via Instagram @kwa_mammkhize

Shauwn Mkhize may have the money, fame, and influence in South Africa, but if a viral video suggests, the same cannot be said for her abroad.

The reality TV star and businesswoman was recently invited to attend the BET Awards in Los Angeles on Sunday night. But scenes from the red carpet show a less than stellar reception to the local star.

Whilst Shauwn Mkhize has been posting up a storm of her BET  Awards experience, one particular clip – posted by the star herself on TikTok – showing her on the red carpet has gone viral.

In it, the Royal AM owner and Kwa Mam’Mkhize star is seen striking several poses in front of a field of photographers. However, none of them seem to pay attention to her.

Celebrity blogger Musa Khawula tweeted: “Shauwn Mkhize at the BET Awards posing by herself with no one interested in taking a picture of her”.

Shauwn Mkhize is not the only South African star to attend the BET Awards. Fellow reality TV personality DJ Zinhle and friend Nomuzi Mabena also scored an invite to the awards ceremony.

TWEEPS AMUSED AFTER STAR IS SNUBBED

After being reposted on Twitter by Musa Khawula, tweeps had a field day ripping Shauwn Mkhize to shreds.

@ThuliXakana: “This has to be the moment she realised she isn’t as rich and important as she thought she was”

@_Hadebe_101: “It serves her right..she loves too much attention”

@TichMakaz: “I thought it’s only the son who suffers from this kind of pox”

@sirboring_26: “Can see where Andile gets their attention-demanding ways”

MaMkhize when she gets back to her hotel room: pic.twitter.com/6pLywgU9gR

Can see where Andile gets their attention demanding ways pic.twitter.com/ZTFnMRWquE