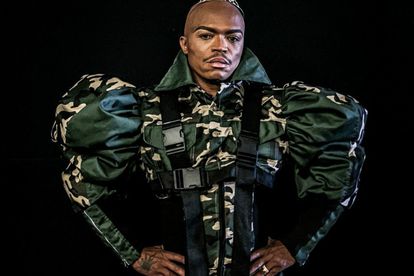 Somizi is setting social media on fire. Not only did he reveal a brave new look, but he is also sharing sinfully delicious recipes on Instagram.

The SA Idols judge on Tuesday shared a short video on how to assemble, as he refers to it, the perfect “Full Grocery Tower”. It can easily be replicated at home, let’s dig a bit deeper.

You will need a large bun – a hamburger bun should do, but the larger the better. Furthermore, mini-meatballs (home-made or storebought) as well as cheese, turkey, bacon, onion, chillies, and an egg.

Hollow out the bun and line with cheese. Next, heat a dash of oil in a pan and saute the onions until transparent. Don’t forget the chillies! Although I might personally go with paprika instead.

Then add your meat of choice. Somizi used meatballs, bacon and turkey, but anything goes, really. Fry up an egg, sunny side up, and then it’s time to assemble!

Scoop your meaty mixture onto a bed of cheese (in the hollowed-out bun) and top with cheese and coriander. Next, add the egg and coriander, and finish off with more cheese.

Then simply transfer to the oven and melt for 5 to 10 minutes on 180 degrees Celsius, or until the cheese is melted to your preference. Enjoy!

Somizi also recently shared photos of his new look on Twitter, and captioned the post: “New look…new me lol, not that deep but deep, happy Saturday”.

Never one to shy away from statement hairstyles – from platinum blonde to pink and everything in between – Somizi has now shocked and delighted fans by shaving off all his hair.

Based on the reactions he received online, most fans are loving the new look, with Stephina Senyolo saying he “looks stunning as always”, while another netizen added:

“Nice outfit and I like the new hair style but what size is that boots. Just curious”.

Not everyone was positive about the change, however. One Twitter user said “new look sounds like the words of someone who just got dumped”, while another said: “What the hell is this”.