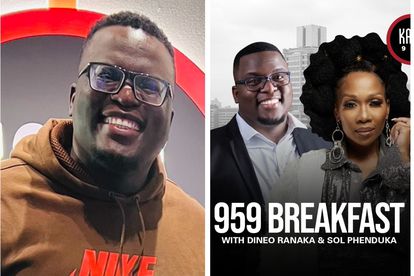 Kaya FM listeners are demanding Sol Phenduka ‘speaks up’ about being ‘mistreated’ by co-host Dineo Ranaka.
Image via Twitter
@solphendukaa

Kaya FM listeners are demanding Sol Phenduka ‘speaks up’ about being ‘mistreated’ by co-host Dineo Ranaka.
Image via Twitter
@solphendukaa

Whilst Sol Phenduka may be outspoken on a variety of issues, his lack of response about his working relationship with Kaya FM co-host Dineo Ranaka has created cause for concern among his fans.

The Podcast and Chill star – who presents the breakfast show alongside Dineo – was even mocked for “blue-ticking” followers who voiced their opinions.

This follows social media commentary that Dineo is “exploiting” and even “belittling” her co-host on air. In one viral clip, Sol was even seen raising his hand for “permission” to talk during the show.

TWEEPS TELL SOL TO ‘SPEAK UP’

Whilst Dineo and Sol continued to dominate fuel speculation over their fraught relationship, fans are begging the latter to speak out.

And the radio personality is seemingly snubbing any interest in it. Taking to Twitter, Sol has posted about a variety of topics, bar his alpha female host.

And tweeps have taken the task to fight Sol’s “battles” on his behalf. Here’s what they had to say in response:

@Mazi1Mbali: “Hey Sol. Is Dineo abusing you at work? Blink twice if it’s true. This is a safe place”

@Sakhilezakes_SA: “This a free space boy laugh all you want. Akekho auntie Dinny”

@TLT_6191: “Sol answer us, is it a problem for you that you are not given enough airtime on radio?”

@TreySa100: “It’s weird that you’re not given a chance to talk on your radio slot. Tomorrow, talk on the morning show, we listen to Kaya FM because of you. Tell Dineo to shut up, we’re tired of listening to her the whole time when you want to raise a point”

Are you gonna speak out or you will keep on raising your hand without being recogznized? pic.twitter.com/KUTyxTLzt5

Meanwhile, Dineo continues to trend on Twitter for what tweeps believe is her attempt to “outshine” Sol.

One tweep even penned an open letter to Kaya FM in the hopes of them taking action against her.

The listener wrote in the letter posted online: “Everytime Sol speaks, he is cut off. That is very disrespectful and such toxic behaviour will not be accepted. We demand Dineo to stop bullying, outsmarting, belittling, or overpowering Sol Phenduka as it appears in front of our eyes.

“We all know that Sol doesn’t deserve such ill-treatment….Most of us are here because of Sol, therefore…we want to hear Sol Phenduka equally as Dineo speaks on radio”.