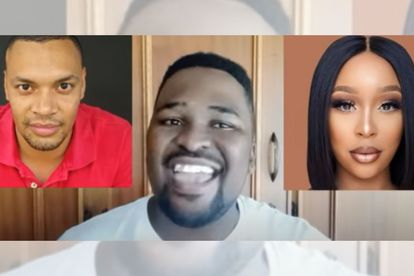 South African YouTuber Slik Talk has spared no mercy for media personality Minenhle “Minnie” Dlamini in a short clip. The video comes only hours after rumours started swirling that the TV presenter and actress allegedly cheated on her soon-to-be ex-husband Quinton Jones.

In the video which has thousands of views already, Slik basically hurls a bunch of insults at Minnie while praising her estranged husband for allegedly standing his ground when it comes to their divorce terms.

Surprisingly, many social media users appear to be agreeing with Slik Talk on his harsh views about the Minnie Dlamini saga.

It appears that Slik Talk’s mouth is fully healed from the beating Cassper Nyovest gave him in their December celebrity boxing match. The controversial content creator is back online and as usual, bashing everyone who he thinks deserves it.

The latest person to get some of the Slik Talk treatment is Soccer Zone presenter Minnie Dlamini.

In a two-minute video posted earlier today, Slik Talk basically says that Minnie is only after her ex Quinton Jones’ money and is desperately holding on to her famous sex appeal.

“Minnie Dlamini back in her heyday was a solid Joburg 10. Currently, she is a gomora six. Nobody is checking her, she is not as bad as she used to be. The fact that she cheated on this man after spending all of his money is despicable.”

“She doesn’t want to sign divorce papers because he made her sign a prenup. He’s a simp but he’s not stupid. Minnie is trying to get this man’s estate. We see you Minnie Dlamini, you chose money over love and now you regret it. You pissed off your looks and now you’re mad.”

He then goes on to bash Quinton for being a “camera-shy simp”. He also says that Minnie is showing off her legs but she’s 32 and no one cares.

“No one cares about your crusty cellulite legs anymore,” he says at the end of the video.

Mzansi agrees with him

Surprisingly the clip got many hits from social media users who have agreed with his sentiments. While some of them defended the former Mrs Jones, others agreed that it wasn’t fair on Quinton.