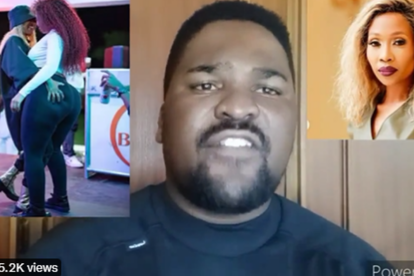 Controversial YouTuber Slik Talk just shared another video on the app, this time bashing media personality and reality TV star Dineo Ranaka who recently announced the start of her very own podcast. During the first episode of the podcast, Dineo shared a number of details about her personal life which left Slik with a lot to say.

Slike Talk is back and causing more trouble than ever with his often controversial opinions on South African celebrities and their lifestyle choices.

The latest person to get dragged by Slik Talk is Metro FM’s Dineo Ranaka who recently opened up about having three children with three different men and her abusive marriage among other things.

Slik Talk did not have an inkling of remorse for Dineo who he says ruined her own life with her actions and “unladylike” behaviour.

According to Slik, no man would dream of dating Dineo because she is a 38-year-old “vile” woman who dresses like a 21-year-old and has no control over her mouth.

“Baby girl, what have you been doing with your life for the past 20 years that you are so messy? Three kids with three baby daddies? What man in his right mind would want to commit to such?

“You are a messy girl and a toxic person. No South African man would want to commit to this situation. You ruined your life at an early age,” he says in the video.

Social media users were seemingly divided over what Slik had to say. While many agreed with him, others advised him to let Dineo live her life the way she chooses.

“This is nonsense, how many men out there have so many kids with different baby mamas, and no judgment is cast against them? Leave Dineo to live her life and be proud of having 3 kids with 3 baby daddies. Let’s stop with these double standards!????????”

“The truth is not comfortable, Slik Talk dropped facts after facts.”