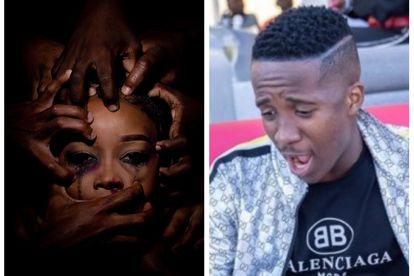 Tweeps have dragged Sithelo Shozi after she started a petition to get ‘protection’ against baby daddy Andile Mpisane.
Image via Instagram
@_sithelo/
@andilempisane10

Tweeps have dragged Sithelo Shozi after she started a petition to get ‘protection’ against baby daddy Andile Mpisane.
Image via Instagram
@_sithelo/
@andilempisane10

Sithelo Shozi has been dragged on the Twitter timeline after she revealed her efforts to obtain a permanent protection order against her ex-boyfriend and baby daddy Andile Mpisane.

The Durban DJ this week kicked off a Change.org petition asking the public to help “protect” her and her three children.

Sithelo last month revealed details of an alleged abusive relationship at the hands of the Royal AM Chairperson. The former couple shares two daughters together – two-year-old Florence “Flo” and Likuwe “Coco”, who recently turned one.

In addition to her Change.org petition, Sithelo also dropped a poster visualising what many women suffer at the hands of abusive relationships

In the image, Sithelo emulates a woman who has been abused – complete with bruises and bloodied eye – as many hands prevent her from “speaking out”.

Sithelo tagged GBV activists Women For Change in the post, who voiced their support for the muso last month.

The image was like by thousands of followers, including celebrity support from Khanyi Mbau, Londie London, and Amanda du Pont.

But whilst Sithelo Shozi was flanked by support on Instagram, on social media platform Twitter, the mom-of-three was widely ridiculed.

Many tweeps took offence to Sithelo’s allegations based on rumours she had started dating Andile Mpisane when he was allegedly underage.

@yellowsimcard: “Her time with Andile is over. Sithelo must just do the MAKHWAPHENI challenge and stand a chance of getting R10k”

@Reckles64241071: “If wants me to take her seriously, she has to tell me what did she see in a teen boy? Let’s start there…. A man? A provider? A father?  Sorry but a woman like that, I can’t take seriously because she abused his innocence first”

@krugersville: “Domestic violence kanjani when Sithelo violated his baby daddy at 16 and she was 24 upwards”

@Reckles64241071: “How would she feel when her son turns 16 and start sleeping and making babies with a 24-year-old woman? She is bitter now because she fumbled the bag”

@Ndreee80424486: “My question is, if he hadn’t left her and stopped buying her those luxurious bags etc WAS SHE GOING TO SPEAK OUT?”