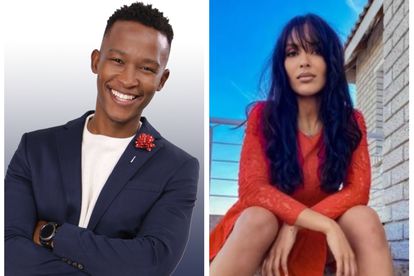 Women for Change has slamed the reappointment of Katlego Maboe on the Expresso Morning Show after his ex-girlfriend Monique Muller accused him of domestic abuse.
Image via Instagram
@expressoshow/
@moniquemuller684

Women for Change has slamed the reappointment of Katlego Maboe on the Expresso Morning Show after his ex-girlfriend Monique Muller accused him of domestic abuse.
Image via Instagram
@expressoshow/
@moniquemuller684

In 2020, Monique was granted a protection order against Katlego after she accused him of domestic abuse. In February this year, the star was exonerated, with the court ruling that there were “no grounds” for the abuse allegations.

The presenter would make an official comeback on Monday 8 August with a three-hour sit-down on his journey there.

Speaking in a teaser clip set in the studio of the talk show, Katlego says: “South Africa, it’s a pleasure to reintroduce myself to you. I can’t wait to be back”. In the clip, Katlego stands beside co-host Graeme Richards who does a fist pump at his colleague’s return.

But Women For Change – and its founder Sabrina Walters, whom Katlego Maboe sued for defamation of character last year – is not impressed.

Taking to their Instagram Stories, the activists wrote: “This is how the Expresso Morning Show celebrates Women’s Day. In another slide, the NGO revealed that their legal battle against Katlego is still in court proceedings.

SABC 3 Head of Channel Pat Van Heerden, meanwhile defended the decision to reappoint Katlego Maboe, stating: “S3 has always viewed the allegations levelled against Mr. Maboe in a serious light and we are delighted that the courts have exonerated him and he can now return to the Expresso family as the host of the show”.

WHAT DO SA VIEWERS SAY?

But whilst the GBV activists are not impressed by the move, it’s safe to say that many South African viewers are happy to see Katlego Maboe’s return to TV

@Joyce_Mrs_LKJ: “With facts, I’m sure you guys have realised how much the viewership drastically dropped. Now watch and see as the entire country comes back to watch. He didn’t deserve that whole dramatic suspension. WELCOME BACK KAT”

@Ruthayzia_23: “Feel like crying with thankfulness my heart is full so happy for him”

@TheRealPholosho: “I am happy for the chap. He was canceled by so many just because of a bitter ex. Mistakes happened and we really need to move on”

@Lebzah_: “Can we just discuss how Katlego Maboe MADE Expresso what it was… his vibe and energy was unmatched! Happy that he’s back. Now we can iron our work clothes in the TV room again”