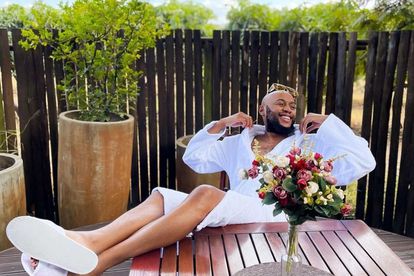 Mohale Motaung and Somizi Mhlongo were making headlines all over South Africa when Mohale accused his now estranged husband of abusing him on more than one occasion. The two have since gone their separate ways and remained pretty quiet up until Somizi threw some shade a Mohale recently.

Once upon a time former Idols SA judge Somizi and his husband were considered South African couple goals. The bubble was quickly popped when Mohale accused his flamboyant partner of abusing him both emotionally and physically on various occasions.

Somizi quickly denied the accusations but was subsequently suspended by both Idols SA and Metro FM.

Now the couple has started to live their best lives separately – that is until Somizi decided to shade Mohale while on Cassper Nyovest’s The Braai Show.

After Cassper asked Somizi about Mohale and he responded:

Cassper then asked him “Are you serious,” to which Somizi replied, “He’s departed from this earth.”

Somizi was soon trending on Twitter but Mohale does not seem to care. He has been living his best life since their split and continued to post snaps of himself partaking in all things luxurious.

He posted a clip of himself encouraging his supporters to enjoy life while bathing in a tub full of rose petals and then shared a snap of himself enjoying an ice-cold mimosa. He also recently took a trip to Cape Town and appeared to have had the best time.

Many of his fans absolutely love to see it and soon headed to the comment section where they wished him well and shared ample words of love and encouragement.