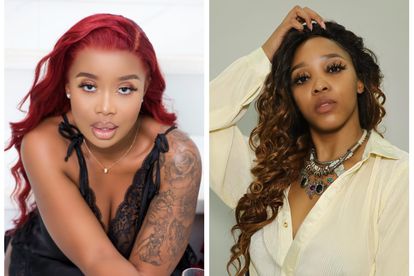 Sbahle Mpisane – the sister of Andile Mpisane – found herself trending on Twitter after she launched an attack against his ex-girlfriend Sithelo Shozi.

The fitness fanatic dropped several bombshells about the Durban DJ, who shares two children with the Royal FM chairman.

Sbahle’s comments came after she revealed in a recent Instagram Live that Sithelo had “blocked” her on social media.

Speaking in a Twitter space hosted by celebrity blogger Musa Khawula, Sbahle Mpisane shed her thoughts about the saga between Andile and his ex-girlfriend.

Last month, Sithelo accused Andile of regularly abusing her throughout their relationship. She also claims that Andile “beat” her in front of his friends and family, and caused her to miscarry their unborn baby. But Sithelo’s comments were rubbished by Andile’s mother Shauwn “MaMkhize”, who called it “false and defamatory”.

Speaking in isiZulu, Sbahle fired several shots against her brother’s ex, which she called a “former friend”.

But whilst Sbahle had her say about she really felt about Sithelo, Twitter listeners took offence to her airing her family’s dirty laundry.

Many tweeps claimed Sbahle was “defending” Andile, particularly on allegations of abuse.

Here’s what tweeps had to say

@APinkStarBurstt: “Sbahle forgets that she’s a woman and what Sithelo went/is going through might happen to her. Unfortunately, no amount of money can save her”

@kylie_tau: “The minute Sbahle said, ‘how do you ruin a Lamborghini that you will never afford your whole life’. I knew she hated Sithelo. They wanna see her suffer”

@PrincessKeab: “Sbahle is a sh*tty person for dragging her like that. Why is she not in jail for that car accident?”

@chazlula: “Sbahle lied about a few things when it comes to her accident. I am not surprised she’s out here trashing Sithelo”

@DlaminyPenelope: “I hope Sbahle one day will find a Man who will abuse her like Andile did to Sithelo”