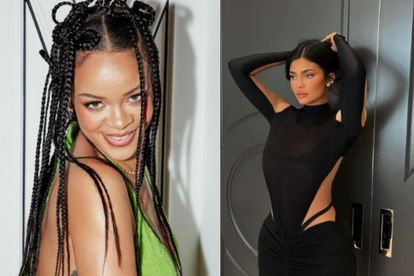 Rihanna has been named the youngest self-made billionaire. What happened to Kylie Jenner? Images via Instagram @badgalriri @kyliejenner.

Rihanna has been named the youngest self-made billionaire. What happened to Kylie Jenner? Images via Instagram @badgalriri @kyliejenner.

Barbadian singer Robyn Rihanna Fenty was named the youngest self-made female billionaire in the United States according to the Forbes 2022 list.

Forbes has officially named 34-year-old Rihanna the youngest self-made billionaire according to the 2022 list. This is after she amassed a net worth of a whopping $1.4 billion (R23.4 billion).

According to Forbes Rihanna’s source of income is cosmetics and music. She amassed her net worth as co-owner of Fenty Beauty and holder of 30 percent stake in her Savage x Fenty lingerie line. The Umbrella hitmaker is also her native Barbados’ first billionaire and the only woman under 40 on this year’s list of female billionaires in the US.

The new mom has also been teasing new music.

“I’m looking at my next project completely differently from the way I had wanted to put it out before. I think this way suits me better, a lot better,” she said to Vogue.

“It’s authentic, it’ll be fun for me, and it takes a lot of the pressure off,” she continued.

WHAT HAPPENED TO KYLIE JENNER?

Kylie Jenner previously held the title of youngest self-made millionaire. This was because of the following deals,

However, in May 2020, Forbes announced  that their staff “recalculated Kylie’s net worth and concluded that she is not a billionaire.” Instead she’s a “more realistic accounting of her personal fortune puts it at just under $900 million.”

Kylie took to Twitter shortly after the news to say that she thought Forbes was a reputable site.

“What am i even waking up to. I thought this was a reputable site.. All i see are a number of inaccurate statements and unproven assumptions lol. I’ve never asked for any title or tried to lie my way there EVER. Period,” she tweeted.

She went on to say that this was the last thing she’s thinking about.

The 24-year-old make up mogul still made the list this year with a net with of a whopping $600 million (R10 billion). She is still the youngest member on the list of America’s richest self-made women.