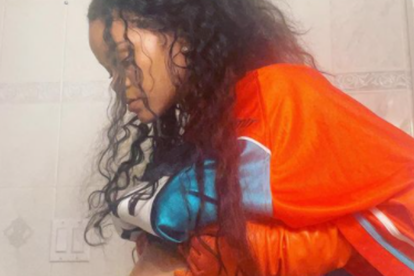 Rihanna is pregnant and this could possibly be the biggest news for 2022 even though the year has just begun. The singer-turned makeup and lingerie mogul shocked her fans when she dropped snaps of her pregnant self and long-term boyfriend A$AP Rocky taking a stroll in New York as part of a shoot for US weekly.

A while ago, US-based musician Rihanna vehemently denied rumours that she was pregnant. We guess she was waiting for the right time because she has since let the cat out of the bag – there’s a mini Riri on the way!

The star shocked millions of her fans across the world who haven’t stopped buzzing over the exciting news ever since. Many people shared the photos that were produced by US weekly earlier this week.

As expected, people have been eagerly waiting for the star to share more bump snaps and Rihanna being the star that she is, did not disappoint any of her loyal fans.

Taking to Instagram, the star reshared the famous US weekly photos and as a small little gift, she included a mirror selfie of herself and her cute little bump which appears to be bigger than ever.

See the snap below:

The comment section was full of congratulatory messages from her fans who love the fact that she is keeping them in the loop. A lot of them also wished her well on the exciting journey ahead.

Look at some of their comments below:

“I’m so happy for you both, congratulations. Love and blessings.”

A spike in orange glove sales

Rihanna’s latest bump snap has not only sent her fans going crazy in the comment section but also in the stores. Fashion marketplace Love The Sales has also noted that people are rushing to purchase the orange gloves she can be seen wearing in the new photo!

The sale of orange gloves has increased by 270% while the orange jersey she is wearing has also shot up in terms of sales.

Of course, this doesn’t come as a surprise since the pink coat she wore when she first announced her pregnancy also started practically flying off the shelves.