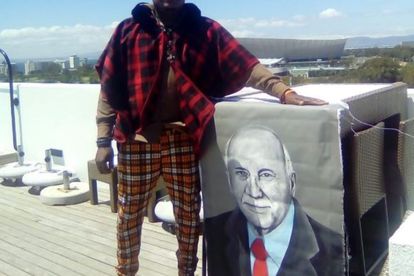 Artist Rasta has unveiled his portrait of former president FW de Klerk who passed away recently. Image via Twitter @AdvBarryRoux

Artist Rasta has unveiled his portrait of former president FW de Klerk who passed away recently. Image via Twitter @AdvBarryRoux

Lebani Sirenje aka “Rasta”has taken up the challenge to paint the late SA president FW de Klerk – and now he is showing off his creation.

The artist was apparently “commissioned” by South African Twitter users to lend his paintbrush to the cause.

And now, the Zimbabwean-born portrait painter has arrived in Cape Town to personally deliver the painting to the family of the late statesman.

RASTA SHOWS OFF HIS ARTWORK

Rasta took to his Twitter page to post a picture of himself holding the artwork. He captioned it: “Just landed in CPT to deliver FW De Klerk painting”.

The artist is expected to hand-deliver the work to the family of FW de Klerk, who reside in Fresnaye, Cape Town. It is unclear who he will meet during the exchange.

Last month, a picture, reportedly painted by Rasta, went viral to the amusement of Black Twitter.

But the picture was actually Rasta’s depiction of Prince Philip, husband of Queen Elizabeth, who died in April at the age of 99

Despite having a history of questionable work, many social media users have claimed he did a “good job”with his latest piece.

And they’re pretty annoyed about it too. Here are some of the Twitter reactions…

“How come you DID such a good job on De Klerk. I’m sorry to say this, mare jy word gebleksem Rasta..”

“You have disappointed me Rasta”

Others gave him a stern “warning”…

One tweep posted: “Your next drawing of a black person better be spot on otherwise we will drag you till you deactivate and throw away your paint brushes”.