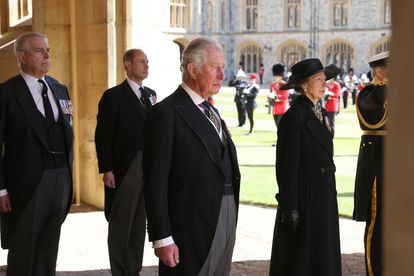 The Duke of York, the Earl of Wessex, the Prince of Wales and the Princess Royal ahead of the funeral of the Duke of Edinburgh at Windsor Castle, Berkshire. Image: RealTimeImages

The Duke of York, the Earl of Wessex, the Prince of Wales and the Princess Royal ahead of the funeral of the Duke of Edinburgh at Windsor Castle, Berkshire. Image: RealTimeImages

Prince Charles is reportedly considering whether or not to pass on his late father’s royal title to his brother Prince Edward.

Who will receive the Duke of Edinburgh title?

According to People, Prince Charles inherited Prince Philip’s Duke of Edinburgh title when his father died in April. When Charles becomes King, the title will merge with the Crown. The new monarch can then decide whether to give it to his youngest brother or another member of the family – or even hold it in abeyance for a time in the future.

In the past, it was reported that the title will go to Edward when the time comes.

At the time of his wedding to Sophie Rhys-Jones in 1999, a statement from Buckingham Palace said that the couple would be titled the Earl and Countess of Wessex. It also noted, “The Queen, The Duke of Edinburgh and the Prince of Wales have also agreed that Prince Edward should be given the Dukedom of Edinburgh in due course when the present title now held by the Prince Philip eventually reverts to the Crown.”

Now, drama ensued after the story about the possible change of plan was first reported by The Sunday Times, which quoted a friend of Charles saying, “It is up to him what happens to the title. It will not go to Edward.”

But, “all stories of this nature are speculation and no final decisions have been taken,” a spokesperson told People. “It would be inappropriate and disrespectful to the Queen to comment on matters of accession and we will be maintaining our long-standing policy of not doing so.”

Ever since Prince Philip’s death, and since Prince Harry and Meghan Markle stepped away from their roles as working royals, Prince Edward and Sophie has become prominent royal family members.

They are said to be close to the Queen and have been championing Philip’s Duke of Edinburgh Award, with Edward serving as a trustee of the youth organisation.

In the past, Sophie recalled an interview with the Daily Telegraph in which she spoke about Philip coming to see them a couple of days after their engagement. “We sat there slightly stunned,” she shared. “He literally came straight in and said: ‘Right. I’d like it very much if you would consider that.'”

Edward pointed out that the title arguably should have been reserved for the older Prince Andrew, but the Queen gave him the royal title of Duke of York title on his wedding day.

“It’s a very bittersweet role to take on because the only way the title can come to me is after both my parents have actually passed away,” Edward said. “It has to go back to the Crown first. My father was very keen that the title should continue, but he didn’t quite move quickly enough with Andrew, so it was us who he eventually had the conversation with. It was a lovely idea; a lovely thought.”

What royal titles to give

There are lots of different titles within the Royal Family. According to Express, for centuries, monarchs have bestowed titles on their family members – often marking big life events such as a royal wedding. And thanks to royal tradition, the Queen can also grant a new ranking to her relatives just because she wants to.