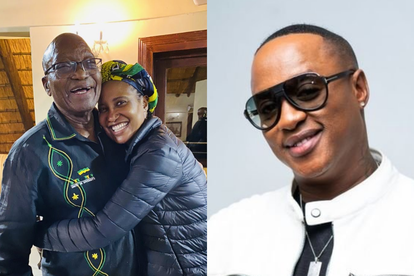 Duduzile Zuma has made her views on Jub Jub’s comments about South Africa’s looting situation very clear. In recent tweets, the daughter of Jacob Zuma basically said Jub Jub was right for condoning looters who have ravished many local outlets.

Dudu not mincing her words

Duduzile Zuma has never been known to shy away from controversy. When she isn’t riling up social media with controversial tweets about her beloved father Jacob Zuma, she is seemingly showing her support for other prominent South African figures who have shared her quite controversial views.

This time, Dudu had many eyebrows raised when she basically sided with Uyajola 99’s Jub Jub. It all started when Jub Jub said that people should continue looting stores.

‘Let them steal if they have to steal’

In a clip that has been widely circulated, Jub Jub can be heard slamming the government while justifying the behaviour of people who made off with various items from local outlets.

Dudu loved to hear it

After spotting the controversial clip, Dudu headed to the comment section where she basically raised her glass to Jub Jub for what she considered real talk.

“Respect to you @official_jubjub … No army was sent when 500 billion was looted,” read her reply to Jub Jub’s video.

Locals don’t know what to make of Dudu

While some loved how Dudu was showing Jub Jub support, others were left with a bad taste in their mouths. Many flocked to the comment section of her post to make their views known:

“Tweeting a lot will not bring the old man out from prison, let alone looting and inciting anarchy.”

READ ALSO: ‘White corruption is worse’: Ntsiki Mazwai on why Zuma must be freed