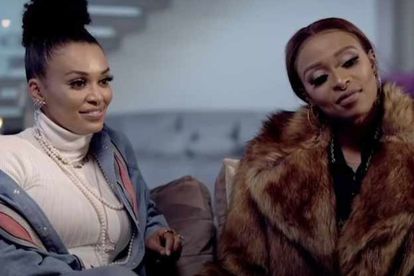 Pearl Thusi and DJ Zinhle have publicly reunited over the weekend – but tweeps are not convinced that it was genuine.
Image via Twitter
@pearlthusi

Pearl Thusi and DJ Zinhle have publicly reunited over the weekend – but tweeps are not convinced that it was genuine.
Image via Twitter
@pearlthusi

Pearl Thusi and DJ Zinhle have reunited – or so they claim – but fans are not convinced that they’re given their friendship another go. In fact, many social media users have accused the pair of “faking” their friendship reunion.

The actress and muso were booked to perform together at the Rockets Lifestyle club in Bryanston over the weekend.

Pearl Thusi also reunited with Lerato Kganyago, whom she is also been rumoured to have past beef with.

PEARL THUSI IS SEEN WITH DJ ZINHLE AND LERATO KGANYAGO

To the surprise of many fans, Pearl Thusi revealed that she would be performing alongside her industry peer and friend DJ Zinhle on Saturday 4 June at Rockets.

According to the rumour mill, Pear and Zinhle’s friendship fell apart as fans noticed that the duo had given each other the cold shoulder on social media. Tweeps even recall how Zinhle failed to wish her bestie a happy birthday last month and how both parties unfollowed each other on Instagram.

Fans have also accused Pearl Thusi of being shady and befriending Nadia Nakai – who is dating Zinhle’s ex and baby daddy AKA.

But over the weekend, Pearl Thusi did her best to change the narrative by putting on a seemingly united front with Zinhle. In clips and pics posted on social media, Pearl Thusi is seen entertaining the crowds with her dance moves, whilst her “bestie” spun the decks.

Pearl Thusi also posed for pics with Lerato Kganyago at The Secret Door nightclub in Pretoria on Friday night, where she hosted another gig. The Fistful of Vengeance star reportedly waded into the beef shared between DJ Zinhle and Lerato over the latter’s wedding invitation snub in 2020.

Tweeps accused Pearl of being “shady” after she posted: “LOL” on social media, following comments made by Lerato earlier this year about being “disappointed” in DJ Zinhle.

Last month, Lerato Kganyago claimed she was ignored by another female celeb after greeting her at an event – who tweeps claimed was DJ Zinhle. “You can’t hide mean girl energy forever”, Lerato posted on her IG Stories.

On Twitter, fans of DJ ZInhle and Pearl Thusi reacted to a post shared by celebrity blogger Musa Khawula who questioned if their reunion was authentic.

And it seems tweeps are of the same belief, accusing Pearl Thusi of “trying too hard” and Zinhle for “securing the bag”.

@MeisieKopa: “I saw the videos on @PearlThusi  IG account, she was trying so hard shame. She looked more like a fan than a friend. On the other hand, the Dj was only focused on her being a Dj only

@Thabang4real: “ I watched all the videos. They both look awkward.  I guess work is work. You just gotta be professional, kudos to both of them for that”

@official_sweets: “But why didn’t DJ Zinhle repost any of the posts Pearl posted yesterday, she tagged her in almost all of them”

@prophet_uknown: “And all the action is everywhere on Pearl Thusi Insta stories and Zinhle is moving on to other stories like there was no friendship with Pearl”