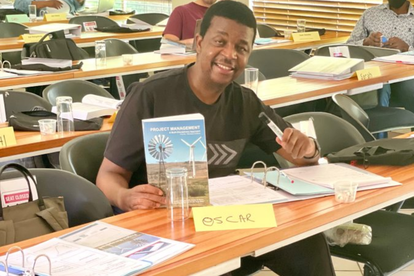 Oskido is a proud graduate. Image via Twitter: @OskidoIBelieve

Oskido is a proud graduate. Image via Twitter: @OskidoIBelieve

Oskido is one of many South African musicians who have made the inspiring decision to head back to school. Taking to Twitter, the DJ excitedly shared the news with his many followers who congratulated him heartily. According to his post, he will be doing a short course at the University of Pretoria.

Oskido goes back to school

Oscar Sibonginkosi Mdlongwa better known by his stage name Oskido has just inspired his millions of followers after he headed online to share some exciting news.

The 54-year-old shared a snap of himself at the University of Pretoria where he just enrolled for a five-month course in Project Management.

According to his post, he will be spending five hours a day, and one week a month. He also encouraged his followers to continue growing and making decisions to empower themselves.

“Today I embark on a new challenge by going back to school. I have enrolled at the University of Pretoria for a 5 month Project Management Programme. That’s 8 am to 5 pm, 1 week per month💪🏿. Believers let’s keep growing & empowering ourselves,” he wrote in the inspirational post.

The fans love to see it

The post was met with ample excitement from Oskido’s fans who love to see that he is heading back to school despite his age. A lot of them shared words of kindness and encouragement with him in the comment section.

“Now that you’re on the other side, they should host a Mapiano Bash outside while you’re in class – let’s see how you hold up.”

“All the best Grootmaan you will make it, just don’t forget to hug a tree Christmas tree and walk barefooted more to restore your ‘natural’ walking pattern with nature.”