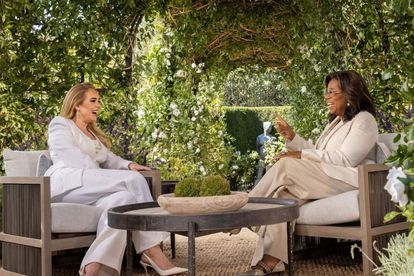 Oprah Winfery avoided a fashion disaster on the ‘Adele: One Night Only’ special. Image via Twitter @Oprah

Oprah Winfery avoided a fashion disaster on the ‘Adele: One Night Only’ special. Image via Twitter @Oprah

The Adele: One Night Only special sees Adele and Oprah Winfrey speak about the rough few years Adele has been through. The British singer sat down with the iconic talk show host to discuss her upcoming album, her divorce and her family life.

Interestingly enough, Oprah made a last-minute change to make sure her outfit complemented her amazing rose garden in the Adele: One Night Only special.

Writing on Oprah Daily, the 67-year-old talk show host detailed how excited she was to meet Adele for the first time. She wanted to wear something special for the interview in her rose garden.

“I thought something in a shade that matched the background of the flowers would be perfect,” wrote Oprah.

She told her team that she wanted to wear something similar to Jennifer Lopez’s Sally LaPointe suit. “I called Sally’s team and we talked about doing something in an apricot colour.”

“Two weeks later, I was sent a picture of what Adele would be wearing. It was a beautiful white suit by Christopher John Rogers. I thought, ‘Woah, I’m going to look like a parrot next to her.’”

‘I DON’T WANT TO STAND OUT LIKE A PEACOCK’

Oprah was worried that Sally LaPointe’s team had gone through the trouble of making a suit for her and she was afraid of standing out like a peacock.

“Oh my God, everybody went to the trouble to get this suit made and now she’s going to be in a neutral colour. I don’t want to stand out like a peacock,” she explained to close friend Gayle King.

Oprah quickly solved her fashion disaster and found a Brunello Cucinelli jumpsuit in her closet that was perfect for the interview. “I was so glad I’d listened to that little whisper and gone with my gut,” wrote Oprah.

The camera crew blocked out all the coloured roses in the interview so only the white ones stood out! If you’re wondering what happened to Oprah’s Sally LaPointe suit…She ended up wearing it to Adele’s performance at the Griffith Observatory on 26 October.

‘ADELE: ONE NIGHT ONLY’ SPECIAL

Adele invited some of her closest friends and colleagues to her performance in the Adele: One Night Only special. Actress Melissa McCartney, world-renowned chef Gordon Ramsey and musician Childish Gambino aka Donald Glover were all in attendance.

Adele performed some of her most popular songs ahead of her album 30 which is set to be released on Friday 19 November.

The Adele: One Night Only special will be aired on M-Net on Monday 22 November for South Africans to watch. The two-hour special will begin at 19:30.