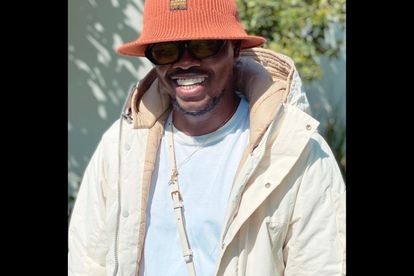 Murdah Bongz is rumoured to have purchased a new set of teeth. Image via Twitter @mus_khawula.

Murdah Bongz is rumoured to have purchased a new set of teeth. Image via Twitter @mus_khawula.

Musician Bongani Mohosana, popularly known as Murdah Bongz is rumoured to have gotten himself a new set of teeth and Tweeps have been gushing over him since 29 April.

MURDAH BONGZ RUMOURED TO HAVE A NEW SET OF TEETH

Murdah Bongz is part of the duo Black Motion, along with Thabo Smol. The musician is also well known for being the boyfriend of DJ and businesswoman Ntombezinhle Jiyane, popularly known as DJ Zinhle. The pair have a seven-month-old daughter together named Asante Mohosana.

Twitter users have been gushing over the musician’s new set of teeth. Take a look…

However, others think DJ Zinhle is “controlling” him.

“DJ Zinhle is changing this boy.. We loved him with that gap.. Women are so controlling 😤😤,” wrote @George_Mogwase.

BLACK MOTION RESPONDS TO RUMOURS OF THEIR SPLIT

Khawula reported that Black Motion has split. Tweeps went crazy blaming DJ Zinhle but the duo labelled the rumours as “damaging and untrue.”

“Spirit Motion would like to state on record that Black Motion members Thabo Muhogwane uka Smaland Bongan Mohosana aka Mordshbongs have not parted ways. Black Motion still exist and has plans for more years to come.”

“The only change which does not affect the dan is that Mardan has rebranded himselt from Murdah to Mörda. This is because he is preparing to launch his sole career as a DJ, but still remains part and parcel of Black Motion.”

The duo explained that the only change is that Murdah Bongz has rebranded himself as Morda. Thabo on the other hand, is venturing into other business aspects which will be announced later on.