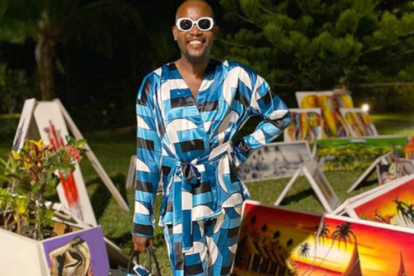 Moshe Ndiki has taken to his social media to call on the whoever bewitching him. Image: @moshendiki/Instagram

Moshe Ndiki has taken to his social media to call on the whoever bewitching him. Image: @moshendiki/Instagram

Mzansi actor, presenter, MC and influencer Moshe Ndiki woke up tripping, certain he had been “bewitched”. According to Ndiki, there’s no way that dream was just a dream…

Moshe claimed he has been bewitched as the person in his dream cooked his favourite dishes just the way he likes them. Don’t we all wish this is the way peeps would be poking our voodoo dolls?!

MOSHE HAS A DREAM, A WONDERFUL DREAM

On Sunday 5 December 2021, Moshe woke up feeling some type of way. Having had such a vivid dream that he couldn’t believe it was not real, our guy had to share.

Taking to his social media page, the salty celeb let his peeps in on the deets. Our guy dreamt that he sat down to the feast of a lifetime.

“I had all of my favourite meats and I ate ALL OF THEM.”

Not being able to explain how this was possible, our main man put it down to witchcraft…LOl. There is no way even his mind could have “cooked that up”.

ALSO READ: ‘MADE FOR THIS’: MOSHE NDIKI ‘PERFECT’ HOST FOR ‘YOU PROMISED TO MARRY ME’

Moshe was grateful for the experience. However, it would have been nice if his “bewitcher” could have let him in on the secret recipe, as reported by Faka News.

“Yhoooo whoever is bewitching me outdid themselves last night, waking up and not leaving a recipe was a bit rude ????”

Seeing Moshe’s post had people crying with laughter. Fans, friends and fellow celebs took to the comment of his post to let Moshe know what a good chuckle they had.

Minnie Dlamini-Jones almost fell out of her bed reading his post. This guy is too funny and his peeps live for this type of energy.

Cracking it up, Moshe’s people wondered if he went to bed hungry or what was up. This post was just what some needed to brighten their day.

TAKE A LOOK AT SOME OF THE HILARIOUS COMMENTS

“Bathe you are not allowed to eat in your sleep. #Ayeye”