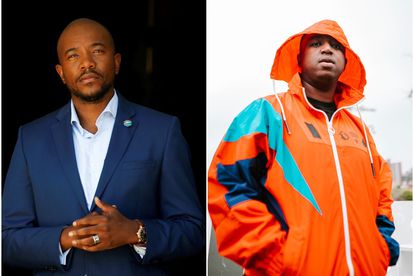 Mmusi Maimane and DJ Shimza have a long history of being firm frenemies, and that’s not about to change anytime soon.

The One Movement South Africa leader and the DJ have come to blows again – online that is – after the former commented on the entertainer’s recent spate in the headlines.

DJ Shimza is currently being investigated by the Public Service Commission (PSC) after his Tembisa restaurant scored a R150,000 government gig.

This, after neither applying for the tender nor being in the department of tourism’s database.

The former DA leader took to Twitter to issue a warning to celebrities in Mzansi.

He tweeted:  “Celebrities should not use proximity or popularity to access state resources unlawfully and unethically. We love your art but we cannot dance to the tunes of corruption. Those turntables will not spin”.

Although he did not name anyone in particular, many believe Mmusi was particularly addressing DJ Shimza over his HangAwt restaurant.

The restaurant was used in a “cook-off” with Somizi Mhlongo in May. Following the event, the PSC received a complaint through the national anti-corruption hotline. A probe has now officially launched.

Others claimed Mmusi’s comments also related to actress Natasha Thahane who reportedly received a R1 million grant from the department of sport, arts and culture towards her studies at the New York Film Academy.

Mmusi added: “Deserving artists have been left in the cold, waiting patiently for support from ministries… Funding must be based on need, based on merit and based on national and social interests not on connections.

Meanwhile DJ Shimza is gearing up to host his second Kunye music festival.

The event will take place in Cape Town on Monday 27 December at the Cabo Beach Club.

The second installment of the lifestyle fest will star the DJ himself alongside Culuo De Song and Zakes Bantwini.

Last month, the inaugural Kunye event received mixed reviews from concert-goers. Whilst some praised the line-up of artists, others criticised concert organisers, complaining about overpriced drinks, lack of seating and an alleged “scam” with tags used to make purchases.