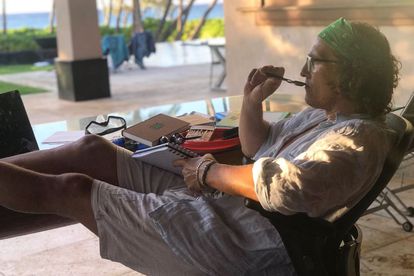 Matthew McConaughey is not opposed to running for Governor of Texas, his home state. Image via Twitter @McConaughey

Matthew McConaughey is not opposed to running for Governor of Texas, his home state. Image via Twitter @McConaughey

Matthew McConaughey wants to enter the world of politics. The Texas native revealed that would seriously consider running for governor of his home state.

He made the comments during an appearance on The Balanced Voice, a podcast series, earlier in March. McConaughey told Houston-based host Rania Mankarious that a potential bid to govern the state of Texas in the 2022 election was a true consideration of his.

“I’m looking into now again, what is my leadership role? Because I do think I have some things to teach and share, and what is my role? What’s my category in my next chapter of life that I’m going into?” McConaughey said.

The actor also said he would be “stepping into more leadership and teaching positions” to help school children who may be at a disadvantage.

Listen to Matthew McConaughey on ‘The Balanced Voice’ podcast:

Matthew McConaughey has discussed politics before

This isn’t the first time the How To Lose A Guy in 10 Days star has spoken about a foray into politics.

In November 2020, The Late Show host Stephen Colbert asked Matthew McConaughey if he was planning to run for Governor of Texas as reports at the time suggested. But the actor wasn’t too enthusiastic about the role at that stage, saying:

“I have no plans to do that right now. No. I don’t get politics. Politics seems to be a broken business. Politics needs to redefine its purpose. As I move forward in life, yes, am I going to consider leadership roles where I can be most useful? I’d love to. I’m doing that regardless. That’s where I sit right now.”

Matthew McConaughey isn’t the only Hollywood star to consider making the jump from acting to politics. Will Smith has talked about stepping into politics in the past, saying he’d consider a run for office in the future.

And Dwayne ‘The Rock’ Johnson admitted he was open to the idea of running for the highest office in the United States, saying:

“I would consider a presidential run in the future if that’s what the people wanted. Truly I mean that, and I’m not flippant in any way with my answer. That would be up to the people. So I would wait, and I would listen.”