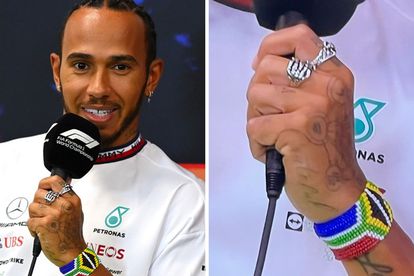 Lewis Hamilton has showed his love for the ‘Motherland’ after donning a beaded bracelet adorned with the SA flag.
Image via Twitter/Sky Sports

Lewis Hamilton has showed his love for the ‘Motherland’ after donning a beaded bracelet adorned with the SA flag.
Image via Twitter/Sky Sports

Lewis Hamilton has yet again shown his love and admiration for South Africa, whilst singing the praise of the African continent.

The British-born Formula One (F1) star was seen showing off a beaded bracelet adorned with the SA flag.

Speaking to Sky Sports on Thursday ahead of his race at the Belgian GP this weekend, Lewis Hamilton reflected on his great African expedition taken during his August break.

Wearing a bracelet beaded in the colours of the SA flag, he said: “Whilst I’ve been there before, it’s the place I wanted to go more than anywhere.

“I got to travel to lots of different places, and it was incredible how welcoming everyone was. It was a very grounding experience to see the landscape and humbling to see people live with literally nothing”.

While the world champion did not visit SA this time, he did trek across countries like Namibia, Rwanda, Kenya, and Tanzania.

Lewis Hamilton has previously led the call for F1 to return to Africa again, and in particular the “motherland”; after they last raced on Johannesburg’s Kyalami circuit in 1993.

He told reporters ahead of his race at the F1 Grand Prix in Texas in October 2021: “The place that I really feel is dear to my heart and most important for me is to get a race back in South Africa. I think there’s a great following out there and it would be great to be able to highlight just how beautiful the motherland is”.

Meanwhile, Lewis Hamilton has shown off his adventures across the African continent in several Instagram posts.

And a jam-packed schedule it was: from keeping watch over wild gorillas in Rwanda to dancing with the Pokot people in Kenya to visiting an animal sanctuary in Tanzania, and finally hot-air ballooning in Namibia.