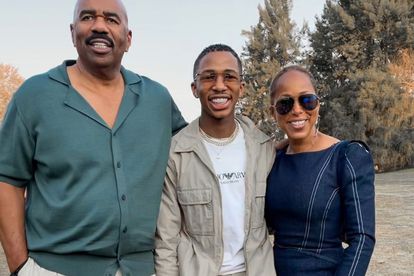 YouTuber Lasizwe Dambuza sent social media into a frenzy on Monday 9 August when he posted images of himself and Family Feud TV host Steve Harvey and his wife, Marjorie Harvey.

The Mzansi media personality claims he went to visit the American author and his wife because he’s related to them.

He says Steve reminds him of his late father and reckons he will get the same look his biological father used to give him when he starts acting a bit gay.

He tagged both Harvey and his wife and captioned the image:

I got a call from my parents they wanted to see their problematic son.

However, a tweep zoomed in on the picture and stated that the hand in the picture doesn’t seem like Dambuza’s.

Tweeps believe the image he posted is a photoshopped image.

Tweeps has also accused him of creating content at every opportunity he gets even at the expense of other people’s feelings.

He also trended for shooting his shot at Vusi Nova on his Drink it or Tell the Truth YouTube show.

When the former The Queen actress Ntando Duma asked him who he would have a one-night stand with between Maps Maponyane, Vusi Nova, and Lunga Shabalala, Lasizwe hinted that he doesn’t like men with hair.

Harvey and his wife haven’t replied to Dambuza’s tweet even though they were tagged by Dambuza on Twitter.