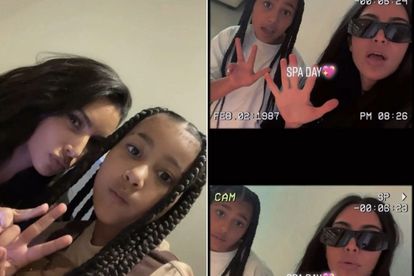 Kim Kardashian and her daughter have joined TikTok.

The former Keeping Up with the Kardashians star and eight-year-old North have already amassed more than 45 000 followers on the platform and gave them plenty of content on Thanksgiving on Thursday 25 November, as they posted 14 videos in just 12 hours.

KIM KARDASHIAN AND NORTH ON TIKTOK

The pair’s first post on their KimAndNorth channel featured footage from a “spa day” they had together, which saw them using Kylie Jenner’s Kylie Cosmetics range and lip-synching to Doja Cat’s Need To Know.

A few hours later, they treated fans to a glimpse of their Thanksgiving decorations, which included pumpkins, leaves, hay, and balloons, and the mother/daughter duo showed their silly sides by sticking their tongues out at the camera, while another video showed them dancing to Easy On Me by Adele.

North had filmed most of the clips, and her nine-year-old cousin Penelope Disick – the child of Kim’s sister Kourtney Kardashian and her former partner Scott Disick – also made an appearance.

Kim – who, as well as North, also has Saint, five, Chicago, three, and Psalm, two, with estranged husband Kanye West – recently revealed her eldest daughter deliberately makes fun of their home when she wants to upset her.

“Every time I get into some kind of disagreement with my daughter North, she thinks this is a dig to me and she’ll say, ‘Your house is so ugly. It’s all white. Who lives like this?'” she said.

“She just thinks it gets to me and it is kind of mean because I like my house.”

The Skims founder recently revealed her eldest daughter is “a full goth girl” while reflecting on how her kids are all very different from one another.

“She is my girliest girl that loves pink and purple and make- up. All my kids are so different. North is like goth – she’s into Hot Topic. She puts fake tattoos on her face, and she listens to Black Sabbath, and she’s just like a full goth girl,” she said.

“Saint is like video game, tech wiz – like, amazing. And Psalm is really into ‘Paw Patrol’ and ‘Cars’. Like, every kid is so different. But Chi-Chi is my little princess. Anything princess, anything girly girl – that’s her.”