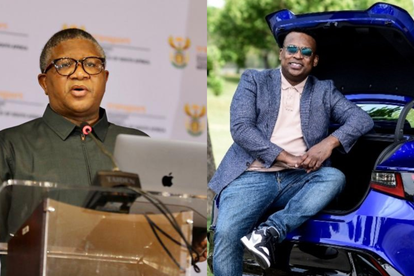 South African Transport Minister Fikile Mbalula has turned into somewhat of a Twitter celebrity over the last few years. This hasn’t always been good for the Minister who often finds himself embroiled in controversy because of the app. He has once found himself in the middle of a face-off, this time with sports journalist, Robert Marawa.

Mbalula vs Marawa: Tweeps watch as the two butt heads

If there is one thing about Fikile Mbalula, it’s that he loves the social media app, Twitter. The Minister is seemingly always on the app sharing tweets that often land him in trouble.

He has once again landed in hot water, this time with South African sportscaster Robert Marawa. It all started when Mbalula tweeted:

“SABC; they dealt with Robert. Mxm, let me keep quiet.”

ALSO READ: Fikile Mbalula: ‘The ANC will die if it doesn’t renew itself’

It seems he already said enough to get Marawa worked up because soon the former SABC employee was grilling the Minister, much to the amusement of Twitter users who quickly grabbed their popcorn to see how it would all unfold.

“Uthini wena campaign manager? Who ‘dealt’ with me? Ungenaphi wena?” the broadcaster wrote.

Of course, locals were not going to let it slide and were soon in the comment section sharing their thoughts on the rough exchange. A lot of them thought Marawa was taking the comment the wrong way:

“I also think Mbaks is simply saying SABC tried to deal with Robert but is “you can’t keep a God given talent on the streets” or am I missing something?”

“Don’t mind him, Bra Rob. The hiding from the elections has paralyzed him. He is disturbed upstairs.”

Mbalula’s comments come after Marawa landed a new gig following his unexpected exit from the SABC.