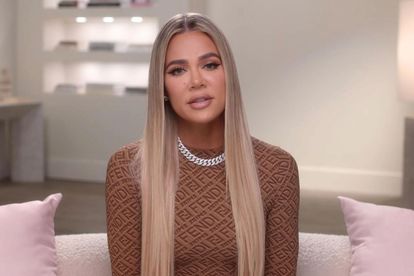 Khloe Kardashian’s pimp pic is back and stirring drama again. Image via Hulu
The Kardashians

Khloe Kardashian’s pimp pic is back and stirring drama again. Image via Hulu
The Kardashians

It appears social media users are still not ready to forgive reality TV star Khloe Kardashian for deciding to dress like a pimp at a Halloween party in 2003. Many felt like the idea was in total bad taste – especially because she also had her famous black friends tied to leashes as part of the bizarre getup.

The photo has resurfaced on community forum page Reddit where Redditors severely slammed Khloe all over again.

If there’s one thing Khloe Kardashian must regret – it is the decision to dress like a pimp with black girls in chains as her props.

The photo which was taken in October 2003, shows Khloe, now 38, dressed in an oversized pastel blue suit while her friends Meagan and La’Myia Good as well as Malika and Khadijah Haqq we’re all dressed in skimpy lingerie while ties to leashes.

Some of the comments the snap garnered include:

“I didn’t even see that at first. I just thought it was a bad photo of her because she looks so different. She had black women on leashes?”

While another chimed in:

“She’s a pimp with her hoes? Wow, racist much.”

Meanwhile Meagan is over it

The actress took to her Instagram to admit that the outfit was a mistake and that she was “young and dumb” at the time.

“That one time on Halloween when you were young and dumb…and clearly didn’t think 15 years ahead lol smh,” the actress wrote on Instagram. “Welp, mistakes were made.”

The response comes after the snap was shared on Twitter where hundreds more social media users agreed that it was a completely fringe idea on behalf of everyone who decided on it.