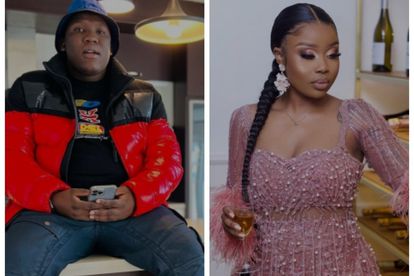 Amid the abuse allegations, Sithelo has been likened to Busta 929 for dating a 17-year-old Andile Mpisane. Image via @_sithelo @busta_929/Instagram

Amid the abuse allegations, Sithelo has been likened to Busta 929 for dating a 17-year-old Andile Mpisane. Image via @_sithelo @busta_929/Instagram

The age of consent has once again become a huge debate since the allegations that were made by DJ and influencer Sithelo Shozi on Tuesday 5 July.

Vocal South African celebrities seem to be divided over the abuse allegations levelled against Royal AM chairman Andile Mpisane by his baby mama. And it appears the same can be said about the general public on Twitter.

While many netizens are in support of Sithelo, who alleges Andile caused her miscarriage during their allegedly abusive relationship, others are comparing her to amapiano DJ and producer Busta 929 who also allegedly slept with a 17-year-old.

A day after Sithelo’s allegations were made public, Andile’s mom Shawn “MamMkhize” Mkhize dismissed the allegations as “false and defamatory”.

The next day, a copy of a protection order allegedly filed by Andile Mpisane in December 2021 gainst Sithelo – accusing her of being “violent and aggressive” — also went viral.

Amid the back and forth, a large number of social media users still want justice to be served, and for them, that means that Andile does not get exonerated for the alleged physical, emotional and verbal abuse.

OR JUSTICE FOR ANDILE MPISANE?

However, Sithelo’s past scandals of being an alleged sexual predator are still following her.

Some tweeps are calling out “double standards” in the support for Sithelo, reminding others of her relationship with Andile who was reportedly 17 when they started dating while she was 24. Tweeps are drawing a comparison between Sithelo and Busta, saying there’s no difference between them.

Sithelo’s relationship with Andile Mpisane came under scrutiny in 2021 when she officially announced it. At the time, Sithelo was 27 years old, while Andile was 20. However, ZAlebs reported that the pair had gotten together when Andile was 17 years old.

When the relationship was made official, the ex-couple had already had their first child. They later had another one in 2021.

In the past, both Sithelo and Busta have been slammed for allegedly dating minors.

In 2021, video footage of the producer allegedly partying with young girls went viral on social media, to which he claimed he was making music with the girls. Again in February, the amapiano DJ was slammed for allegedly being romantically linked to a minor.

In May, fresh allegations about the Umsebenzi Wethu hitmaker, who allegedly impregnated a 17-year-old girl emerged.