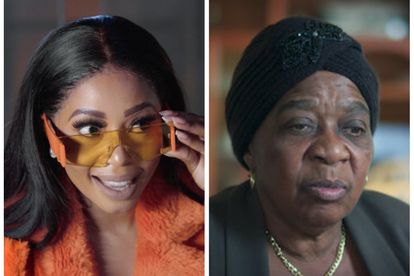 Kelly Khumalo has reacted to news that Senzo Meyiwa’s mother wanted to ‘get rid of her’.
Image via Showmax, ‘Life with Kelly Khumalo’/ Netflix, ‘Senzo Meyiwa: Murder of a Soccer Star’.

Kelly Khumalo has reacted to news that Senzo Meyiwa’s mother wanted to ‘get rid of her’.
Image via Showmax, ‘Life with Kelly Khumalo’/ Netflix, ‘Senzo Meyiwa: Murder of a Soccer Star’.

Kelly Khumalo has more than her fair share of critics, but that doesn’t bother her in the slightest.

In fact, the award-winning singer has gone as far as to claim she is “untouchable”. Her comments were made in the debut episode of season 3 of her Showmax reality TV show Life with Kelly Khumalo.

Over the years, Kelly Khumalo has faced widespread calls to be held accountable for her slain soccer star boyfriend Senzo Meyiwa. The Orlando Pirates goalkeeper was shot dead on 26 October 2014, whilst in the company of Kelly, family, and friends at her mother’s Vosloorus home.

But whilst Kelly has been thrust into the spotlight again amid Senzo Meyiwa’s murder trial – with a mysterious second docket naming her as a murder suspect – she remains unbothered.

Speaking with her best friend Wanda Baloyi, Kelly Khumalo reacted to the news that Senzo’s mother had visited a witch doctor in an attempt to “get rid of me”. The revelation was made in the Netflix documentary Senzo Meyiwa: Murder of a Soccer Star.

Kelly said of Senzo’s mom: “I’m a child of the gods. If you try to do away with me, it comes back to you …Spiritually, you can’t touch me. It is that clear. If you are pointing a weapon at me, it will come back to you. Whether you like it or not”.

ALSO READ: ‘She went to a witch doctor to get rid of me’: Kelly Khumalo on Senzo’s mom

SOMIZI: ‘YOU ARE UNTOUCHABLE‘

In another scene from the episode, Somizi echoed Kelly Khumalo’s sentiments. “You are untouchable”, he said to her after meeting her backstage at her gospel concert.

Kelly and Somizi have been friends for many years . The duo often feature on each other’s social media pages and reality TV shows. She said of their friendship: “We have a very spiritual relationship”.

Kelly Khumalo has also spoken of her own “spiritual gift”. She said in a recent Instagram video: “If you know me very well, you would know that I am a very spiritual person and I have a gift, in terms of spirituality. I see things and I feel things and with so much that we are going through as a nation.

She added: “One voice that was loud to me, was to ask people, plead with people, to pray and tell God exactly what we want from this situation, because he is the only person who can put an end to this”.