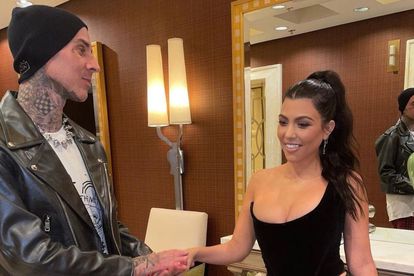 Following reality star Kourtney Kardashian and boyfriend American musician Travis Barker’s trip to Las Vegas last week, many fans were convinced the couple were engaged. However, sources have confirmed that the rumours are false.

‘SO HAPPY FOR YOU GUYS’: TRAVIS DAUGHTER

Kourtney and Travis were in Las Vegas for the Ultimate Fighting Championship (UFC) match between Dustin Poirier and Conor McGregor. The pair sat ringside and packed on the public display of affection.

The engagement speculation started when Travis Barker’s daughter, Alabama posted her dad and Kourtney on her Instagram story with the caption “so happy for you guys,” which led to fans and followers thinking the couple got engaged after several months of dating.

Kourtney posted pictures of herself with Travis running down the hotel passage with the caption “swipe for happy girl” adding to the speculation.

The next clue was that Kourtney’s sister, Khloe sent her flowers and a cute note which many thought were congratulatory flowers fitting in with the engagement theory.

HAPPY COUPLE BUT NOT ENGAGED

TMZ has confirmed that although Travis and and Kourtney are a happy couple, he did not put a ring on it, yet. So what did Alabama’s Instagram story mean? Well she was just happy to see her dad happy, according to TMZ.

The couple often share steamy pictures together and do not shy away from affection so settling down together seems to be in the cards. Kourtney recently left a comment on her boyfriends post saying “I want to suck your blood” and Travis, who seems to be on the exact same wavelength as Kourtney responded, “My favorite”.

SCOTT REACTS TO THE ENGAGEMENT RUMOURS

During season 20 of Keeping Up With The Kardashians, Kourtney’s ex and father to her three children – Mason, Penelope and Reign openly admitted that he will always love Kourtney and mentioned how much he wanted to make it work.

However, Kourtney is now with Travis and the pair have been moving fast which would of course affect Scott. An inside source claimed that the Flip It Like Disick star was currently just keeping away.

“He was definitely just trying to do his own thing. He’s keeping away from all of the Kourtney and Travis stuff that’s going on,” said a source according to Fox News.

Scott is currently on vacation in Hamptons, east of New York City with his 20-year-old girlfriend Amelia Hamlin and his three kids.