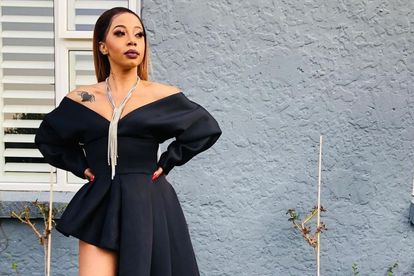 Singer, actress and reality star Kelly Khumalo calling out her son Christian for speaking “broken” English has left many social media users in stitches after media personality Somizi Mhlongo posted the clip to his Instagram, on 16 July.

In a recent episode of Life With Kelly Khumalo season two that airs on Thursdays, the Empini hitmaker is seen walking up to her son Christian, before they head out to go somewhere and asking him a question.

When Christian answers her question she immediately calls him out for speaking “broken” English.

“Why did you bring these?” asked Khumalo.

“She brang them, not me,” said Christian.

“Brang or brought? I don’t send you to school to speak broken English,” said Khumalo.

The reality star then proceeded to casually walk away with a serious face like she did not just insult her son, adding to the humour.

Media personality and Idols SA judge Somizi Mhlongo found the clip hilarious as he posted it to his Instagram page where he has 4.1 million followers. The video currently has over 524 000 views and over six thousand comments.

“Someone pls call B3 funerals coz this just killed me,” wrote Somizi in the caption.

Celebrities, fans and followers thought the clip was hilarious and many took to the comments section to share their thoughts.

“She is so right. You can’t go to school and come back saying brang,” wrote @misstakue.

“Kelly is not paying fees for her to get brang things!!!,” wrote @dineo_mashego.

While Tweeps also had to have their say.

Kelly Khumalo recently opened up about the hard times she’s had in relationships. Christian’s father is television host and hip-hop artist Jub Jub who recently commented “let them steal” in regard to the unrest taking place in South Africa.

However, that is not the only backlash he has been getting. Kelly Khumalo has said that she has made efforts for Christian to get to know Jub Jub but she has had no luck and she is done trying.

“I’ve tried and when Christian gets older he will know. I mean his old enough to remember that I did mention certain things with him because I was trying to make an effort for him to have a father in his life. I am washing my hands. I have had enough,” said Khumalo

The actress also opened up about how her ex, former goalkeeper for Orlando Pirates, Senzo Meyiwa only told her he was married when she was three months pregnant with their child, Thingo.

ALSO READ: #UnrestSA: Could Jub Jub and Duduzane be up for incitement?