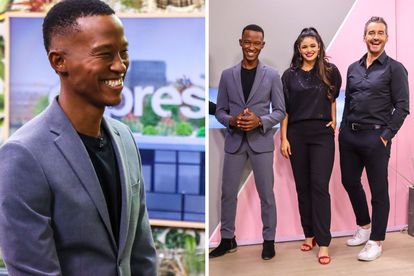 Katlego Maboe made an emotional return to the Expresso Morning Show on Monday 8 August.
Image: Supplied

Katlego Maboe made an emotional return to the Expresso Morning Show on Monday 8 August.
Image: Supplied

It was an emotional episode on the Expresso Morning Show on Monday morning when Katlego Maboe made his “triumphant return” following a two-year hiatus.

The media personality took a break from the talk show after his personal life was thrust into the limelight. In 2020, Katlego Maboe became a hot topic of discussion after a video of him confessing to cheating on his girlfriend Monique Muller went viral.

Monique was also granted a protection order against Katlego after she accused him of domestic abuse.

However in February this year, the star was exonerated, with the court ruling that there were “no grounds” for the abuse allegations.

Katlego Maboe sat down with co-presenter Graeme Richards for an emotional heart-to-heart on his experience.

Speaking through tears, Katlego Maboe revealed how happy he was to “come home”.

“A lot has changed. I didn’t know what this would feel like – It felt good. It felt welcoming, like home – just a home that you haven’t seen in a long time”.

Kat also reflected on how the last two years had “changed” him.

He continued: “The ‘new’ me is certainly not the ‘old’ me. But, there are certainly elements of the ‘old’ me that remain that I think have stood me in good stead.

“No matter what has happened to me over the past couple of years, I never want to let go of this desire that I have to be a force of positivity in people’s lives”.

At the height of his “storm” – amid a legal battle, allegations of gender-based violence and even losing work and an income, Katlego Maboe confessed to wanting to end his life.

He said: “There was a moment when I thought the darkest thoughts. I thought wouldn’t it be better if it was just done? Just quickly. Now. Done. My family wouldn’t have to worry about having to call me every day and deal with me”.

Ultimately it was his son Phoenix and the love and support from family, friends, and fans that helped him pick up the pieces and put them back together.

He continued: “There have been many touch-and-go moments where my self-identity was questioned, but I worked my way through it with support from friends and family and people who I met in person or on social media who have constantly told me to ‘Get up and start again’”.

He added: “To every single person who has prayed for this moment and wielded it to come to fruition, thank you from the bottom of my heart. I cannot tell you how much this means to me. Here’s to many more feel-good moments”.

Going through a difficult phase in his life brought many a life lesson, claims Katlego Maboe.

“That realisation came to me, even more so, once I had my son. I would look at him and the way he looks at me and how he tries to imitate me in certain things that he does, made me find certain stability within myself of acceptance where, perhaps, he would learn, in the years to come, to accept himself for who he is. It made me realise that I am made of strong stuff. I have to believe that I am made of stronger stuff than this”.

And during the storm itself, Katlego Maboe was just grateful to spend more time with his son.

He added: “A lot of people look at the last couple of years and the downside of it. They look at the loss and everything that came with that, but I look at the fact that I have had a solid two and a half years of quality time with my son and nothing can replace that.

“Not any amount of money or dream or ambition or achievement could ever replace that. But yes, I want to show him what the world is about, the importance of connection with human beings, to have empathy, and understanding”.

Katlego Maboe’s return to the Expresso Morning Show saw many South Africans show their support – and happiness of his return – on social media.

@ThabangMaxtee: “Congratulations you can’t take a good man down”

@Cat_Coral: “Welcome back Kat. Back where you belong”

@Lesabeabi: “Welcome back my brother. We are looking forward to good memories. Your story is changing someone’s life out there”

@MarHen36: “The most unique quality any man can possess is lifting himself up when he has fallen. Leave the past behind and look forward. May your rise back be blessed and dramaless Katlego Maboe”

@puseletso_j: “He’s an amazing presenter and always gives his absolute best. It’s great to have him back on our screens again. Welcome back Katlego Maboe…. it was never the same without you”